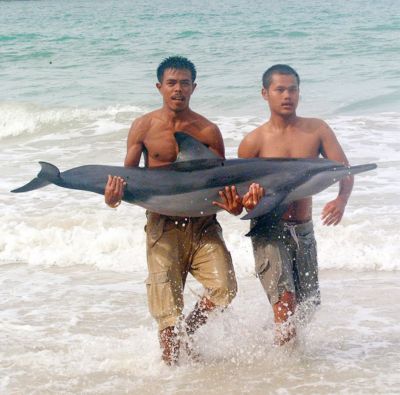 PHUKET: Two gravely ill dolphins are being treated at the Phuket Marine Biological Center (PMBC) after washing ashore in separate incidents – the first at Karon Beach yesterday and the second in Phang Nga’s Tai Muang District this morning.

The spinner, 1.6 meters long and about five years old, was too weak to swim back out into the heavy surf and showed symptoms of a severe lung infection, but otherwise appeared healthy.

Officers at the Kata Fire Station had tried unsuccessfully to push the animal back out to sea through the heavy surf at Karon Beach, and then took the animal by pickup truck to a section of Kata Beach with smaller waves, but the dolphin was too weak too swim away.

The second dolphin, a 50-kilogram female striped dolphin (S. coeruleoalba), was taken to the PMBC this morning. It also showed signs of respiratory infection but was also covered in lesions.

The dolphins are being treated in separate tanks.

K. Kongkiat rated the chances of recovery for both animals as very slim.

Blood samples have been taken, but it is still too early to determine whether the two animals were suffering from the same type of infection, though he said that was unlikely given that they were of different species.

When weak from illness, dolphins tend to seek out calm water and this sometimes leads to them being beached, he said.

Phuket to have biggest aquarium in Southeast Asia