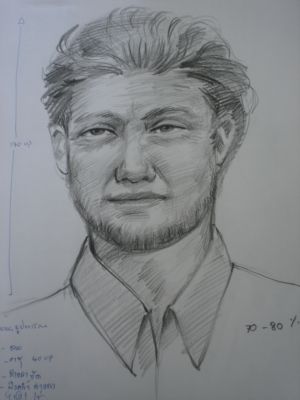 KARON: Despite an intensive manhunt, police have yet to apprehend the Caucasian man who held up the Siam Commercial Bank branch on Patak Rd in Karon late yesterday afternoon, getting away with 420,000 baht in cash.

Soon after the heist, about 4:30 pm, Chalong Police began checking all guesthouses and motorcycle rental agencies in the area in the hope of tracking down the man, who was confirmed by Gen Decha as being a “farang”.

“I think he has been in Thailand [a while] because he could speak some Thai. I think he may have tried to copy the Dutchman who held up the office at Phuket Villa California recently [and was apprehended the following day].

“Witnesses said the man waited on his motorbike in front of the bank for about 30 minutes before entering,” Gen Decha said.

In carrying out the heist, the thief wore a face mask, a white long-sleeved shirt and black trousers. He entered the bank quickly and promptly held a gun to the head of Branch Manager Thurdsak Chusap and demanded cash.

“Even though he was masked, I believe he was a foreigner because he spoke both Thai and English. He kept shouting ‘ray-o ray-o!’ [faster, faster] and ‘More, more!’. He wasn’t a big guy, though. Actually he was shorter than me at about 160 to 165 centimeters,” K. Thurdsak told the Gazette.

“I was really frightened. Everything happened so fast, it was over in just two minutes and he made off on a Suzuki Step motorbike with 420,000 baht. Fortunately, some people outside got a look at his motorbike. That should provide the police with some valuable clues,” he said.

The robbery was recorded on the bank’s closed-circuit television cameras, but the images were not very clear, he said.

“Our bank is under 24-hour video surveillance and I am not sure if the robber knows that images of him robbing the bank were recorded,” he said.

The robber waited until just before the bank’s 4:30 pm closing time to strike, he noted.

Despite the robbery, the bank was back to business as usual and ready to pay out end-of-the-month salaries due today for many workers on the island, he said.

Chairing this morning’s meeting, Phuket Governor Niran Kalayanamit was clearly exasperated by the second robbery-at-gunpoint by a farang in the same month.

Crime rates were already high enough among Thais and the numerous illegal laborers on the island without tourists getting in on the act, he said.

Gov Niran told the security committee he understood that government officers assigned to Phuket were tired with the constant challenges they face here, but nevertheless encouraged them to redouble their efforts to catch the thief in order to protect Phuket’s image as a safe tourist destination.