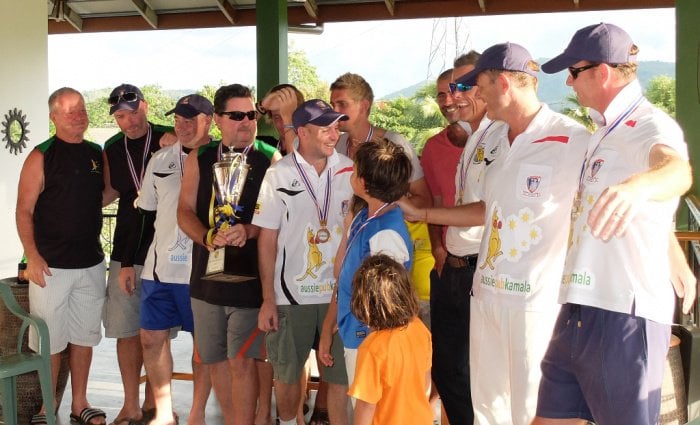 PHUKET: The Phuket Cricket Group Championship Cup Final was played on Sunday May 17 at the Alan Cooke Ground with the Thalang Cricket Team (TCT) taking their second consecutive title with a comprehensive 157 run win over the Patong Cricket Club.

Both teams were boasting strong line-ups for the 100 over grand final, with David Thomas and Jean Matthee the only obvious absentees for their respective teams.

Patong had a great season and had finished on the top of the table with six wins from eight matches, while TCT had earned the right to play in the final after beating ICC, Village and Laguna in their previous three matches.

There was some heavy rain over night so, after inspecting the wet pitch and the dampened outfield of the Alan Cooke Ground, it was Patong’s captain Seemant Raju who won the toss and elected to field first.

Pace bowler Waseem Bhatt justified his captain’s decision by picking up the important wicket of Justin Thomatos (six runs) and then sent TCT captain Bill Stahmer’s stumps flying to have TCT 21-2 off 6.1 overs.

Only one further chance was created before the drink break with an edge from TCT opener Andrew McMillan spilling out of the keepers gloves when McMillan was on 14 runs.

After the 10 over drink break, TCT’s Neil Culpan and McMillan built a steady partnership against Patong’s second change bowlers until Culpan played a ball from Imtiyaz Mushtaq onto his stumps in the 18th over, breaking the 64 run partnership.

Patong’s bowlers kept the umpires busy with inaccurate bowling and the sundries helped TCT along to 102-3 at the 20 over break.

22 runs were added in the next 4 overs before TCT batsman Simon Wetherell had to be helped from the field with a suspected torn hamstring.

Craig Murphy came out to replace Wetherell and saw just one delivery, neatly stumped down the leg side by Stuart Hamilton.

The final was then well in the balance with TCT 124-4.

Patong’s Justin Swart picked up McMillan’s wicket (59 runs) and Thai player Pao to have Patong in a strong position at the 30 over drink break with TCT 146-6 and one man down.

Alex Runhaar (5*) and Garry Lane faced the tough task of holding out against Patong’s Bhatt and Mushtaq, the league’s two highest wicket takers this season. The TCT all-rounders showed great poise at the crease to absorb some fiery overs and walk off together at the 40 over drink break with TCT 184-6.

Looking to move the score along Lane charged the bowling of Mushtaq in the 44th over, only to be clean bowled. Simon Wetherell replaced Lane in the middle and, although limited to hobbling between the wickets, he put on a further 22 runs with Runhaar before becoming Bhatt’s 3rd wicket.

Patong required an achievable 234 runs from 50 overs to hold the cup aloft, but started poorly with Seemant Raju caught behind for 0 in the first over and fellow opener Mushtaq also caught in the 2nd over.

Justin Swart and Stuart Hamilton had their defenses put to the test with a hot spell of pace bowling from Neil Culpan’s quick left arm. Swart was hit in the head from a short pitched delivery, but continued to bat on for his team.

The match swayed in the favor of TCT when Hamilton was spectacularly caught behind by the diving McMillan in the 8th over. Things went from bad to worse for Patong when Culpan picked up the wickets of Morton and Bhatt in the 9th over to leave Patong languishing on 30-5 at the 10 over drink break.

It was slow going after the break for Patong, with a washout the most likely way that they could be holding the championship cup after the match.

Anthony Van Blerk and Swart looked to have the TCT medium pacers measure before an edge to slip saw an end to Van Blerk’s fine season with the bat.

Swart was adjudged LBW in the 18th over and it was only a matter of time before TCT could celebrate a second consecutive championship.

Neil Quail and Owen Pringle kept TCT out in the middle for another 13 overs before Patong’s last wicket fell into the hands of TCT’s captain, Bill Stahmer.