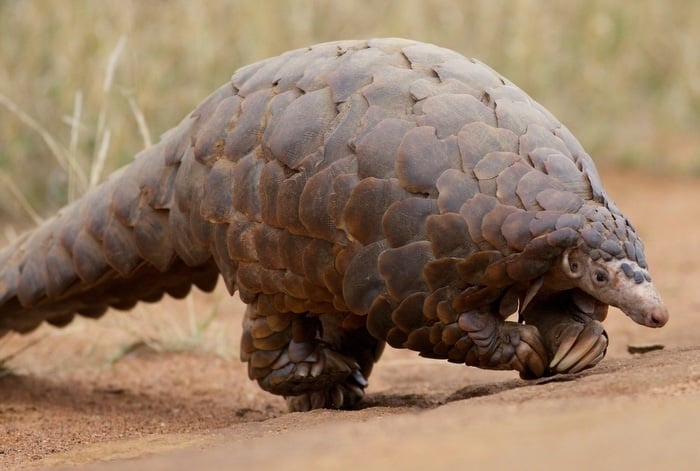 PHUKET: The Phuket Gazette recently reported a gruesome find: a couple strangled and left to rot in a dense rubber plantation in Krabi. People were guided to the spot by the stench; the couple had been dead for about five days. This man and wife were pangolin hunters and the likely explanation for their demise – so far not confirmed – was that they had been murdered by others engaged in the same grisly business.

Whatever the facts of the case, here was yet more evidence that the trade in pangolins continues unabated. Let me explain. Pangolins, so called from the Malay word “pengguling”, meaning something rolled up, are a threatened species worldwide, and Thailand is one of the last bastions of this extraordinary creature. All eight species are in danger.

Covered with large keratin scales – think pine cone or globe artichoke – the pangolin is the only mammal thus equipped. These tough overlapping scales armor a flexible body equipped with an elongated snout, a long prehensile tail, and large front claws that enable it to climb trees and dig into the ground. Up to thirty inches long and weighing a maximum of seven kilograms, it is primarily nocturnal. During the day, it hides in holes in trees or in burrows, a gentle and solitary creature which only meets up with other pangolins to mate. The female gives birth to one or two babies per year, which are cared for and carried around by the mother for several months.

The scaly anteater’s name is accurately descriptive: its diet consists entirely of ants or termites which it licks out of holes or sweeps up with a thin, sticky tongue that is up to sixteen inches in length.

Having no teeth, its only defense is to roll up into a ball with its head under its tail and its scales projecting to form an armored shell. Puzzled, animal predators leave them alone. But, sadly, it is no defense against cunning humans, their only enemy.

Such a truly unique animal is threatened by habitat loss – most of the pristine forest in South Thailand is now given over to rubber and oil palm plantations – and more importantly, by poaching.

Of course, it makes absolutely no sense, in a country where cheap protein in the form of chicken or pork is so plentiful, to kill these peaceable and docile creatures. But apparently it is the most trafficked animal in the world, with at least 20,000 being killed every year. Here in Asia, there is a thriving market for them, especially in China where pangolin is considered a delicacy and can fetch 300 dollars a kilogram. Sometimes the poor creatures are injected with water to increase their weight.

Nothing is wasted; the scales are boiled off and either ground up or used as fashion accessories. And Asian quacks maintain that the flesh and blood has both aphrodisiacal and medicinal value, especially in the treatment of certain cancers. Utter rubbish, of course.

I have never seen one in the wild and would bet my bottom dollar that there are none climbing free in Phuket. I have, however, seen pictures of these hapless creatures in crates at the Chatuchak Weekend Market in Bangkok, waiting to end up in local restaurants or to be exported abroad. Though they are transported live, so that the vendor can have fresh meat, they are delicate creatures and rarely survive more than a few days.

This illegal trade, despite being banned worldwide in 2000, is still carried on, largely unchecked. In my view, it is only a matter of time before they are exterminated.

I sometimes muse that such wonderful creatures might be able to find a haven in Thai gardens or other green spaces. Certainly a pangolin or two would be most welcome in my garden; the only problem is that I’m not sure the location would provide enough ants, termites and larvae for its daily needs. Eight ounces of ants… A great asset though.

Gardening: Laying down the lawn