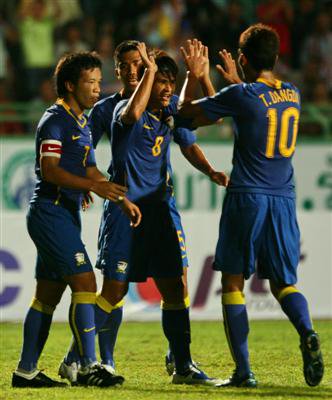 PHUKET CITY: Thailand will take on a highly favored Denmark side in the finals of the King’s Cup soccer tournament, with kick-off at Surakul Stadium at 7 pm tomorrow.

Thailand made it through to the final after beating Lebanon in a game marred by a series of ugly second-half brawls.

Five minutes into the second half Lebanon pulled a goal back to make it 2-1, but two consecutive serious head injuries to Lebanon players, both accidental, incensed the Lebanese side and set the stage for the ugly scenes that followed.

The game erupted following a foul called on a Lebanese player. Both sets of players squared up to each other and had to be separated by staff and security guards. A 10-minute standoff ensued, during which it appeared the Lebanon team were refusing to play.

They were eventually persuaded back onto the pitch and play resumed, but tempers were running high and a series of late challenges sparked a second brawl.

With the stoppages taken into account, only about 30 minutes of football were played in the second half, but the referee had clearly seen enough and opted to end the game prematurely.

The result will stand and Thailand will face Denmark in the final.

Lebanon will take on North Korea in the third-place playoff, which will kick off at 4 pm.

A large turnout is expected among Phuket’s growing community of Danish expat residents, many of whom turned up for yesterday’s 1-0 win over North Korea.

However, they will be far outnumbered by supporters of the home team, who are hoping for an upset win following the Thai team’s heartbreaking loss to Vietnam in the finals of the Suzuki Cup last month.