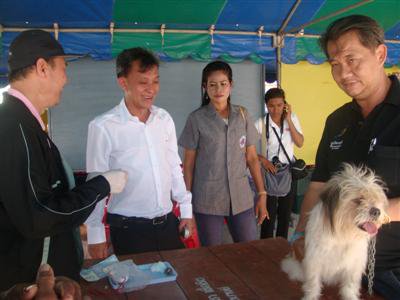 RASSADA, PHUKET: To keep the island rabies-free and reduce the number of stray dogs, Rassada Municipality on January 21 held a free clinic during which some 300 pets were either sterilized, vaccinated or implanted with microchips.

The event, held at the Rassada Municipal Children’s Playground, was the first of its kind by any of Phuket’s 19 local administrative bodies.

Organized in conjunction with the Phuket Provincial Livestock Office and the Soi Dog Foundation (SDF), the opening of the event was presided over by Rassada Mayor Suratin Lianudom.

Some 300 microchips were available for free implantation by the Livestock Office workers, while SDF volunteers sterilized over 48 animals.

Mayor Surathin said there were an estimated 1,000 pet dogs in Rassada and about 200 to 300 strays.

The municipality has to spend a lot of its annual budget dealing with problems created by strays, he said.

Last year alone, the municipality rounded up more than 100 dogs and sent them to the Mid-Road Dog shelter at Bang Khanoon in Tambon Thepkrasattri, which the municipality has provided with funding of 100,000 baht for dog food and staff salaries.

Pet owners should bring copies of their Thai ID card and house registration form when requesting a chip, she said.

Phuket Livestock Office Veterinarian Jirayu Niranroj said the microchips are easily implanted and pose no health risks. Although the Rassada project is the first of its kind by a local administrative district, the Livestock Office has implanted 200 microchips in pets at the Land & Houses residential estate in Chalong, he added.

The next clinic in Rassada will take place at the Ban Kuku School on January 31, from 9 am to 2 pm. The same free services will be available, though microchips will only be implanted in dogs, said Mayor Surathin.

A similar clinic is scheduled to take place at the Rawai Municipality offices on February 13, SDF Vice President John Dalley told the Gazette.

Pet owners can also get microchips implanted at private clinics, where fees generally start at about 500 baht. The same documentation is required and all information is sent to the Livestock Department database.