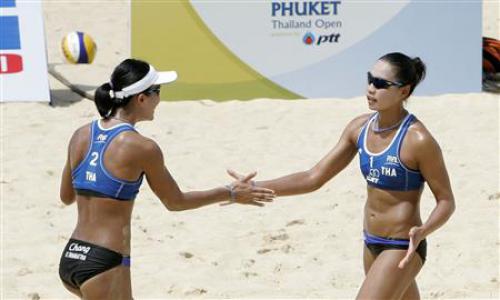 PHUKET: Thailand’s favorites Varapatsorn Radarong and Tanarattha Udomchavee are through to the knock-out stage taking two wins in Pool A, at the 2013 FIVB Beach Volleyball Phuket Open on Thursday. Thailand has hosted over 10 women’s and one men’s FIVB tournament and the Open is back for an eighth consecutive year.

Despite losing their final pool match to Dutch pair Rimke Braakman and Jantine van der Vlist who have yet to drop a match in Phuket, the Thai pair take second spot in the pool and progress through to Friday. The match was caught in the second huge downpour of the day causing problems for both teams, but the Dutch team remained in control and took the win 2-0 (21-15, 21-18).

Radarong/Udomchavee professed hopes of a top ten finish entering Phuket following their best ever result, a fifth place at the Anapa Open this year. The Thai team realize they have a challenge on their hands and are up against the world’s best in Phuket.

“We are pleased, but we are not that happy with our performance today and this is the first time that we have progressed to the next round here in the world tour,” said Udomchavee.

To get into the top ten we will need to improve a lot, but we are very proud of ourselves today. We have developed a lot this year to get where we are now.”

“I’m happy, but we need to improve on our performance a lot, especially with defending the ball,” said Radarong.

It feels good to be here, it’s not every day we play in the world tour with the top players.”

On Wednesday, the Thai pair played in only one pool match after Poland’s Monika Brzostek and Kinga Kolosinska forfeited and the win automatically went to Radarong/Udomchavee. In the morning, the Thai team played Ukraine’s Svitlana Baburina and Diana Mulenko, and taking full advantage of their familiar surroundings, quickly closed the win 2-0 (21-8, 21-14).

Sweden’s Nina Grawender and Karin Lundqvist took a place in the main draw as lucky losers after being knocked out in the qualification tournament by Svitlana Baburina and Diana Mulenko from Ukraine. The Swedish pair grabbed the chance with both hands, taking two wins in Pool E and progressing into the single elimination tournament.

The Swedish pair bagged their first pool win yesterday taking Canada’s Jamie Lynn Broder and Kristina Valjas by surprise 2-0 (21-18, 21-18). Grawender/Lundqvist then needed a favorable result in their second match, after losing to Brazil’s Agatha Bednarczuk and Maria Antonelli in the morning 2-0 (21-19, 21-16).

“It was really hot, so it was just trying to survive the match, but we had a good match,” said Grawender.

Grawender/Lundqvist faced Cindy Treland and Janne Pedersen from Norway in the deciding pool match which was one of the matches at 13:30 in Phuket that was hit by heavy rainfall.

Norway took the first set 21-19 and the score stood a level 4-4 in the second when the rain came. By halfway through the second set, it was a matter of who could deal best with the conditions which continued for the duration of the match. Sweden enlisted a little help from their height advantage to end the match 2-1(19-21, 21-18, 15-7).

“The match was kind of insane actually, started off really humid and then the sky just opened up and it was raining like this tropical rain can be, but it was interesting and we stuck through so I’m very happy with that,” said Lundqvist.

“We’re just enjoying every moment. We thought that after the qualification that the vacation would begin but no. We’re supposed to keep training and playing hard so that’s our main focus and we’re just going with it,” said Lundqvist.

Phuket in general is gorgeous, I think there has been a lot of good matches and a big crowd too so it’s a good event, I like it.”

The single elimination tournament begins on Friday and the Phuket Open runs until November 3.