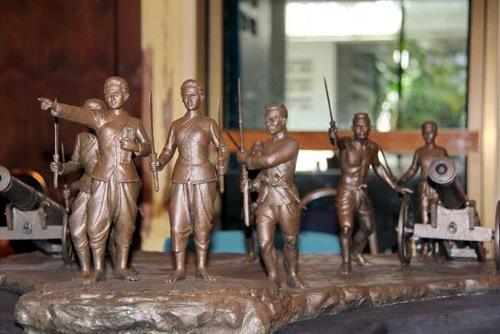 PHUKET: Nine important figures in Phuket’s history will be honored with statues in Thalang by the beginning of next year.

The goal of the 26-million-baht project is to remind Phuketians of their brave ancestors who defended Phuket from Burmese invaders, said Phuket Vice Governor Sommai Prijasilpa.

“We chose nine figures to honor HM King Bhumibol Adulyadej because he is the ninth king of the Chakri Dynasty,” she said.

“Some of the figures we chose were war heroes and others were closely connected to the royal family,” said Secretary of the Heroines’ Foundation Koraticha Wattanapan.

The two most prominent war heroes are the sisters Thao Thepkrasattri and Thao Srisoonthorn, who defended the island against the Burmese during a five-week battle in 1785, and are already commemorated by statues at the junction of the two roads named after them: Thepkrasattri and Srisoonthorn.

Two leaders of the Royal Thai Navy who helped battle the Burmese at other times are also among the nine: Phraya Yokrabut Jui and Thao Thepkrasattri’s son Phraya Thalang Thian.

The two non-military figures are Niam, who was the first Phuketian to work as a royal page, to Rama I, and Chao Chom Manda Thong, the only Phuketian consort to Rama I who bore him a daughter.

The nine statues will stand about 2.5 meters tall and be cast in bronze by the Asia Fine Art company in Ang Thong province, said V/Gov Sommai.

The Phuket Office of public Works and Town & Country Planning has started to clear an area in the Thalang Victory Memorial Field in order to build a platform for the statues.

“In addition to being a reminder of our ancestors, we also intend it to be a tourist attraction,” V/Gov Sommai said.

“In the future, we hope to build up the area around them with period houses to create a historical atmosphere and imitate how people lived in the past,” she said.