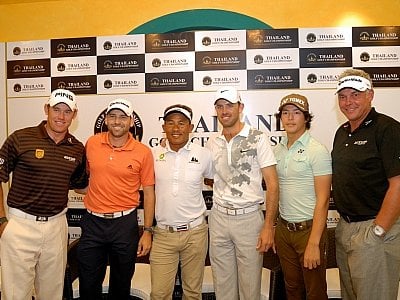 This week’s inaugural US$1 million Thailand Golf Championship reflects the growing strength of the game in Asia, say the world stars who have gathered for the Asian Tour’s season finale which starts on Thursday.

“Golf is booming in Asia. There are a lot of tournaments here with big prize funds. Immediately after I came here, it felt like a big tournament. I think a lot of the players want to play in Asia,” said Westwood on the eve of the Thailand Golf Championship.

An Asian specialist where he has notched victories in Malaysia, Macau and Japan including at the Indonesian Masters and Ballantine’s Championship in Korea, Westwood will be looking to end his 2011 campaign on a high note by bagging a fourth victory of the season as he was also victorious in South Africa two weeks ago.

He will launch his campaign alongside Japanese star Ishikawa and local hero and three-time Asian Tour number one Thongchai. “I look forward to it. I like Thailand and playing in Asia. I’ve won in Korea and Indonesia this year. The course is fabulous and in very good condition but a lot tougher compared to a few years ago. I look forward to playing with Thongchai and Ryo, although playing with Ryo makes me feel old!” said Westwood.

Garcia, ranked 16th in the world after notching back-to-back wins in Spain in October, last visited Thailand some 10 years ago and has been impressed with what he has seen on his return. “It has changed quite a bit in the last eight or 10 years. Everything is evolving and growing faster and faster so it is normal that we will get a couple of new tournaments here as the years go by,” said the Spaniard.

Clarke, who started playing in Asia in the 1990s, said playing standards in Asia has also risen in tandem with the growing number of new events such as the Thailand Golf Championship.

Westwood predicted that the staging of mega events like the Thailand Golf Championship, arguably the most prestigious in Thailand, will help encourage young kids to pick up the game in Asia.

“When you have more tournaments with world-class players, you will have more Asian kids see what are the levels they have to play at. 10 year old kids now can be watching this week and 10 years later they can be playing tournaments and that’s when you are going to see the fruits of this tournaments flow through to the grassroots level,” he said.

Organisers of the Thailand Golf Championship have taken various initiatives such as a charity auction which raised 2.5 million baht on Tuesday night as well as ticket proceeds going to charity for flood relief in the country.

Masters Tournament winner Schwartzel, whose Masters pin flag and putter raised 1 million baht at the auction, said the staging of the new full-field Asian Tour tournament would show the world that Thailand was getting back to normalcy after the floods.

“I think people around the world are seeing everything on the television on the floods. Hopefully this tournament, beamed around the world, will show that things are getting better and they will come back, spend money and help this country back on its feet,” he said.

Westwood added: “I think tourism is the main thing in Thailand as well and by having a world class sporting event, we can encourage them (tourists) to come back.”

About the Asian Tour

As the official sanctioning body for professional golf in Asia, the Asian Tour leads the development of golf across the region, enhancing the careers of its members while maintaining a commitment to the integrity of the game.

The Asian Tour, through its membership of the International Federation of PGA Tours, is the only recognized pan-Asian professional golf tour in Asia.
This unique feature positions the Asian Tour at the pinnacle of professional golf in Asia; providing its events with Official World Ranking status.