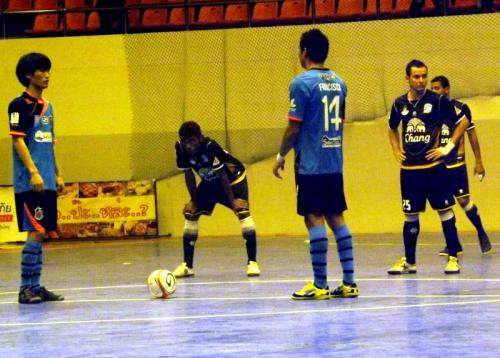 Played at the Si Saket Rajbhat University in Isarn, the match was both side’s 17th match of a 30 fixture season.

Like their first match in Phuket both sides were evenly matched with Brazilian talent showcased throughout.

Jardel’s goals in the 7th, 24th and 40th minute were complemented by a 34th minute goal from Thai player Saharat In-pun.

However, Si Saket’s three South Americans proved too much for Phuket, with goals by Jose Airton (scoring on 4 and 21 minutes), Romualdo Namorato (9) and Francisco Edson (40), in addition to two more goals by Si Saket’s Thai star Chaloemphon Hun-yu.

The result sees Phuket drop to 9th place, while Si Saket moved up to 6th place in the 16-team league.

Following such a tiring road schedule over the last two weeks, Phuket have another tough away match this Saturday.

Their opponents, Royal Navy are currently 4th in the league. Earlier this month, Phuket beat Navy, by a score of 4-2.

The match will be played at Fashion Island, Bangkok scheduled to kickoff at 4pm.

Therefore, there is a good chance the match will be streamed live. Fans can check at game time by clicking this link.

After that match, Phuket will finally return home, with their next game on Wednesday, February 6 against CAT FC.