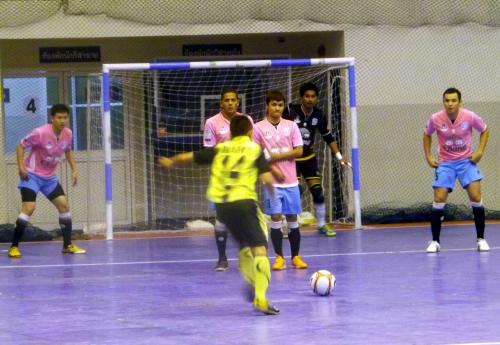 Played in front of about 500 fans at the Saphan Hin Indoor Sports Complex, the match was both sides’ 19th of 30 fixtures in the Thailand Futsal Premier League (TFPL) 2012-2013 season.

Phuket’s leading scorer, Jackson Santos activated the scoreboard half way through the first half with a beautiful goal from the top of the area – his 19th of the season to put his side up 1-0 at the half.

However, the visitors came out refreshed in the second half, with Panuwat Chanta finding the equalizer in the 29th minute.

Phuket pressured the goal and had many chances to retake the lead, but the visitors’ defense was in fine form.

An own goal resulting from miscommunication between Phuket’s keeper and Brazilian winger Marcos sealed the fate for the Andaman Pearl late in the second half, and the Pearl were not able to make up for it.

After the match, CAT FC’s coach Narongsak Kongkaeo, or Coach Noi, told the Gazette that he was pleased with the result.

“It was a tough match and Phuket played well. But luck was on our side in the end and I’m glad that we secured three more points, especially on the road.”

Asked about his season goal, Coach Noi remark: “Of course I set the bar high every season – and that is to finish in the top three if not five.”

CAT’s only foreign player in the night’s lineup, Brazilian winger Roberto told the Gazette that his team was relieved.

“We were tired after the 11 hour bus trip to Phuket. In the last 4 to 5 games, our teamwork has improved much. Although we were quite lucky about the last goal, this win has been a boost for our confidence.”

The atmosphere in the home team’s locker room was host to a different mood.
A greatly disapointed club director and major benefactor for the team, ‘Ko Lek’ gave a serious lecture to the boys.

“In [11-a-side] football, this many consecutive losses would be unacceptable, and the coaches and managers would be expected to move aside so someone else more capable could come and replace them…

“Every time we lose, we say we’re going to start all over and try again. So I want you all to think hard about how you’re going to do it [start over] this time.

“The next game will be an important assessment match. If you want to continue to see me here, then I suggest you all think real hard how you are going to turn things around.”

As a result of the loss, Phuket fell into 9th place of the 16 team elite league, while CAT FC moved up in 8th.

Phuket’s chance to redeem themselves will be this Saturday, when they will play Bangkok based club, Leo Bang Sue FC.

The match will kickoff at 7pm at the Saphan Indoor Sports Complex.

Adult tickets are 100 baht. Children under 150 cm are admitted free.

Other TFPL Results from Wednesday night