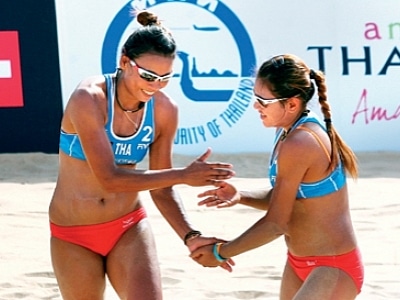 PHUKET: Last stop on the 2011 FIVB Beach Volleyball Swatch World Tour is the Phuket Thailand Open powered by PTT, from November 1 to 6, and this popular event is now being used as a springboard for the Thai teams to make a challenge on the 2012 World Tour.

Thai teams have rarely made an appearance on the international circuit over the past 10 years, despite favorable results on the home sands of Phuket. But next year, due to the availability of sponsorship support, it has been announced that at least two teams will compete on the FIVB Beach Volleyball Swatch World Tour.

Beach Volleyball coach Petcharat Putsorn who along with the Thailand Volleyball Association is organizing the Thailand teams for the 2012 World Tour briefly outlined a two-year plan.

“The teams will use the Phuket Thailand Open as a springboard to test the local girls’ competitiveness against the world’s top teams. It is our target to get the Thai teams through to the second day of the main draw competition. If we can achieve this goal, then we know we have the ability to make an impact next year.

“Of course it won’t be easy for us in our first year on the tour. We will have to play in the qualifying rounds at most of the tournaments as our teams do not have any ranking points. It is our goal to use 2012 to gain the necessary experience and pick up as many points as possible, so that we can launch a strong challenge in 2013 with the goal of getting at least two teams into the world’s top 50,” Petcharat said.

One of the more senior members of the Thai team, Kamoltip Kulna is looking forward to the upcoming challenges.

“We have been training hard for the tournament in Phuket and the SEA games, so we are feeling fit and confident about our chances of causing some surprises. Of course a lot depends on the draw, but I am sure that the Thai beach volley fans will be out there cheering us on, which is a huge motivation for us,” she said.

The Phuket Gazette is a proud sponsor of the FIVB Phuket Thailand Volleyball Open.