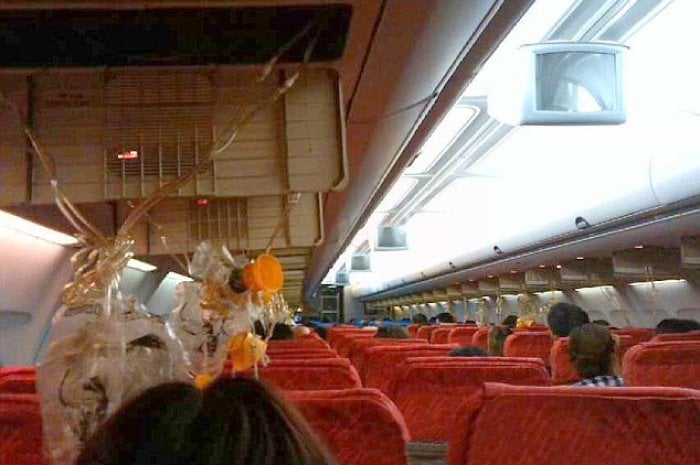 PHUKET: An Orient Thai airlines flight en route from Phuket to Chengdu, China, reportedly suffered an engine failure and plunged from the sky, before levelling out and safely making an emergency landing at Kunming Airport on Saturday.

UK daily newspaper The Daily Mail reported that an engine failure sent the aircraft into a dramatic plunge, prompting oxygen masks to be released from overhead compartments and leaving passengers bleeding from noses and mouths from the rapid change in cabin pressure.

Flight attendants began to cry and one passenger said that he feared the plane would break apart or crash, The Daily Mail reported.

Orient Thai is the surviving parent company of ill-fated One-Two-Go budget airline, whose Flight OG269 crashed in Phuket on September 16, 2007, killing 89 people on board (story here). The most recent Orient Thai incident couldn’t come at a worse time for the Thai aviation industry.

China has joined South Korea and Japan in stopping Thailand-based airlines from flying charters and new routes because of safety concerns highlighted by an international audit, Thai officials said yesterday.

The move will come as a blow to Thai air carriers that have just begun to recover after a poor 2014, when political protests slashed the number of tourists visiting the country.

The halt is disrupting the peak travel season around the Thai New Year Songkran holiday next month. About 100 charter flights to Japan alone have been cancelled and some 30,000 tickets either refunded or modified, Somchai Piputwat, the director general of Thailand’s Department of Civil Aviation (DCA), told reporters yesterday.

Budget carriers have been worst hit, Thai officials said, though national carrier Thai Airways International, which is in the midst of a major restructuring, has also been prevented from expanding because of the halt.

One aviation source with knowledge of the matter told Reuters that significant safety concerns had been uncovered during an audit of Thailand’s civil aviation authority by the Montreal-based International Civil Aviation Organization (ICAO).

The source said that the ICAO’s concerns revolved around the issue of operator certificates to carriers by the Thai authority. While the ICAO cannot “downgrade” states, its audits identify concerns that could lead countries to take steps such as banning flights.

“The audit revealed some safety concerns, primarily relating to air operator certification procedures,” ICAO spokesman Anthony Philbin said in an email, adding that Thailand had submitted a plan to the ICAO to correct the issues identified.

The US Federal Aviation Administration said it was aware of ICAO’s safety concerns, but declined to say whether it was reviewing Thailand’s aviation safety status, and referred questions to Thai authorities.

Analysts say an FAA downgrade of Thailand’s aviation safety assessment would prevent Thai airlines from launching or expanding service to the United States, either directly or as code-share partners. It would also limit their choice of aircraft and increase inspections of Thai aircraft at US airports.

While the ICAO has not made the results of the audit public, Minister Prajin said that aviation authorities in some countries had taken pre-emptive steps to stop Thai carriers from flying new routes.

South Korea has rejected plans by charter carrier Asia Atlantic Airlines to start new flights, he added. Japan had already made a similar move, according to Thai media reports.

Other airlines affected by the ban are Thai Airways and long-haul, low-cost carrier Thai AirAsiaX.

“It’s a domino effect,” ACM Prajin said, adding that the ministry hoped the issue would be resolved within eight months.

Thai Airways declined to comment. Nok Airlines said that the impact on NokScoot, its joint venture with Singapore Airlines subsidiary, would be limited.

Voradech Hanprasert, deputy permanent secretary at the Thai Transport Ministry, said that the ICAO findings had no impact on existing flights. However, Thailand is concerned the results could lead the FAA to put the country on its watch list, he said.

An ICAO representative from one Asia-Pacific country yesterday said that he felt Thailand would rectify the concerns raised in the audit.

“A [country] like Thailand will definitely take measures to address these issues,” he said. “I think they need time.”