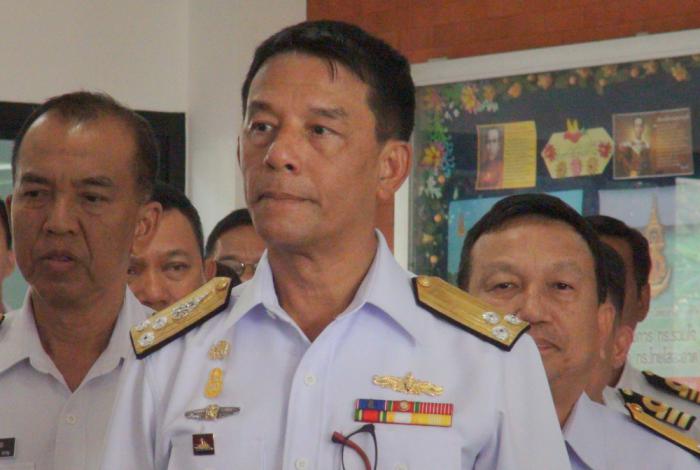 PHUKET: The Royal Thai Navy Third Area Command has confirmed to the Phuket Gazette that it will continue its search-and-rescue mission for Malaysia Airlines Flight MH370 in the Malacca Strait.

The news follows the revelation late this afternoon that Flight MH370 had diverted from its scheduled course and crossed the Malay peninsula toward the busy shipping lanes southwest of Phuket.

Third Naval Area Commander Vice Admiral Tharathorn Khajitsuwan reported earlier today that his officers were calling off their search as they had failed to find any remains of the Boeing 777or the 239 people on board (story here).

However, a senior source within the Malaysian military told Reuters this afternoon that the aircraft flew for more than an hour after vanishing from air traffic control screens, changing course and travelling west over the Strait of Malacca.

Malaysian authorities had previously said flight MH370 disappeared about an hour after it took off from Kuala Lumpur for the Chinese capital of Beijing, roughly midway between Malaysia’s east coast town of Kota Bharu and the southern tip of Vietnam, flying at 10,670 meters.

“It changed course after Kota Bharu and took a lower altitude,” the source told Reuters this afternoon. “It made it into the Malacca Strait.”

The Strait of Malacca, one of the world’s busiest shipping channels, runs along Malaysia’s west coast.

Earlier today, Malaysia’s Berita Harian newspaper quoted air force chief Rodzali Daud as saying the Malaysia Airlines plane was last detected by military radar at 2:40am on Saturday, near the island of Pulau Perak at the northern end of the Strait of Malacca. It was flying at a height of about 9,000m, he was quoted as saying.

“The last time the flight was detected close to Pulau Perak in the Melaka Straits at 2:40am by the control tower before the signal was lost,” the paper quoted Mr Daud as saying.

A non-military source familiar with the investigations said the report was being checked.

“This report is being investigated by the DCA [Department of Civil Aviation] and the search and rescue team,” the source said. “There are a lot of such reports.”

The time given by Mr Daud was one hour and 10 minutes after the plane vanished from air traffic control screens over Igari waypoint, midway between Malaysia and Vietnam.

There was no word on what happened to the plane thereafter.

If the reports from the military are verified, it would mean the plane was able to maintain a cruising altitude and flew for about 500km with its transponder and other tracking systems apparently switched off.

Malaysia has extended the massive search operation for the plane to the Malacca Strait after initially focusing on the South China Sea.

Tourist Police confirm round up of Phuket dive instructors