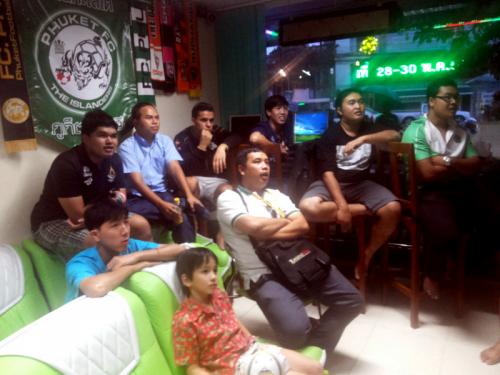 PHUKET: Picking up their seventh draw in 12 matches, Phuket FC let a two goal lead slip in their away match to Trat FC on Saturday night, which ended with a final score of 3-3.

It was a roller coaster ride for the hundreds of fans across the island – tuned in to the live Football Siam TV broadcast – in addition to nearly two thousand more who attended the match at Trat’s Central Sports Stadium, just to the west of the Thai-Cambodian border.

It was both side’s 12th match of the 34-fixture Yamaha League One (YL1) 2013 season.
Phuket’s Nenebi scored the opening goal 10 minutes in, heading in a well placed corner kick from fellow defender, Tongchai Kuenkhunthod.

The Islanders doubled their lead in the opening minutes of the second half, with Georgian forward, Giorgi outrunning his marker, and beating the Trat keeper at the near post.

Out with a minor leg injury, star striker, Luiz “Dudu” Purcino anxiously watched on from Nork Sanam cafe, across the street from Surakul Stadium in Phuket Town.

Phuket must have felt deja vu when their two goal lead rapidly slipped away after Trat’s Chokchai Chuchai and Tinnakorn Asurin – both defenders – scored within three minutes of each other from set plays, in the 55th and 57th minutes, respectively.

With the playing field level, the mood in Phuket’s cafes and bars was quickly flipped upside down when another home-team defender, Trairong Kaenjun gave his side the advantage.

Back on the attack, the visitors’ Ivorian stalwart, Nenebi, went on to assist Giorgi who scored his second and the equalizer on 87 minutes.

Despite five minutes of injury time given, neither side could break the deadlock. The match was the highest scoring professional football match in the Kingdom that evening.

For video highlights of the match, including all goals, click here.

Following are other YL1 results from the weekend

And from the Thai Premier League:

Suited in his former team’s Osotspa Saraburi jacket, Luiz “Dudu” Purcino said after the match that he will begin personal training as of Sunday, May 26, and doesn’t think it will be long before he can play again.

Meanwhile, a battered Phuket FC immediately return to the island to host Southern YL1 rivals, Krabi FC in what will surely be a tense yet exciting Phang Nga bay derby on Wednesday evening. Kickoff for the match will be at 6:30pm.