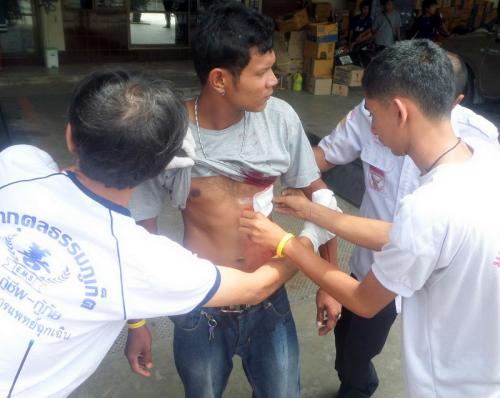 PHUKET: A Burmese man working as a pump attendant at a Phuket gas station was slashed yesterday after he punched one of five Burmese customers who did not have the money to pay for the gas they had just received.

“We found Mr Mao, 26, with a knife wound to the chest,” Lt Col Pratuang said.

“But they didn’t have the money to pay for the 100 baht of petrol pumped into their tank,” Col Pratuang explained.

“He saw Mr Mao talk to them for a while and then he [Mr Mao] punched one of them in the face,” he added.

The other Burmese men on the motorbike reacted angrily, with one of them pulling a knife and slashing Mr Mao across his left ribs.

“Mr Mao was taken to Patong Hospital and is in good condition,” Col Pratuang said.

“We are now checking CCTV camera footage of the incident and searching for the five Burmese men,” he added.