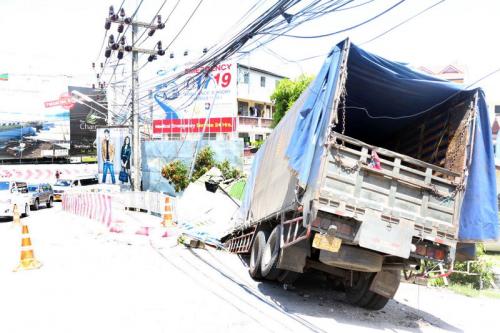 PHUKET: The brakes on a 10-wheeled truck failed as it descended into Patong this morning, sending the heavy vehicle careening off the road and into a roadside ditch.

No injuries were reported from the accident, Lt Col Nikorn Chuthong of the Patong Police said.

Truck driver Somneuk Cherngthorn, 41, was delivering a small load of merchandise from Phuket Town at about 9:30am when the accident occurred.

The 10-wheeler, registered in Nakhon Pathom province in Northeastern Thailand, missed oncoming traffic, struck the roadside guard rail, rammed a billboard and flattened a street lamp before coming to a full stop by slamming into the ditch.

“I was heading down the hill and the brakes failed. I did my best and luckily avoided hitting any oncoming vehicles – it was rush hour,” Mr Somneuk explained.

“I aimed for the far side of the road and hit the advertising billboard to make sure the truck was well out of the way of other vehicles,” he said.

Malee Saengfah was at home when her house narrowly escaped being struck by the runaway truck.

“I was so lucky the truck did not hit my house. I heard the crash and rushed out to see what happened,” she said.

“I saw the driver get out of the cab. He quickly explained the brakes had failed,” Ms Malee added.

Col Nikorn told the Phuket Gazette that a team of officers had been assigned to investigate the accident and follow up with any necessary legal action.