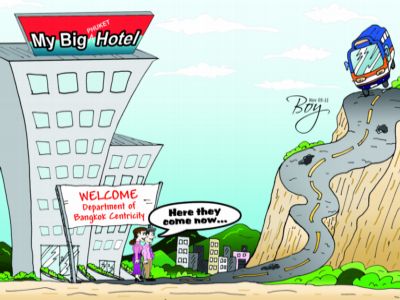 PHUKET: While the floods laying siege to Bangkok have dominated national news and made headlines around the world for weeks, Phuket has remained safe and dry. And as such, the province has been, as it well should be, a major platform for flood relief for hundreds of thousands of victims throughout Thailand’s central plains.

Heartwarming initiatives continue underway in Phuket from many local organizations, public and private sector alike. It would be difficult for a resident foreigner not to notice that there is something quite special about the Thai propensity for mercy. Spontaneous and natural, it is evident in all walks of life.

But the flood images carried by news services have reaped not only mercy but also significant economic damage. Among the roughly two-thirds of the Thai provinces where there are no floods, Phuket, in particular, is under the gun, as demonstrated, for example, by the 15 teams pulling out of the big Beach Volleyball World Tour event at Karon Beach, the final games of which are played today.

Even though entrants contacted tournament director Geoffrey Rowe directly, he could not convince all of them that Bangkok’s Suvarnabhumi Airport was fully operational and that all connections from that airport to Phuket were (and are) running according to schedule.

The fact that Mr Rowe even needed to try to convince the players of this truth is what deserves particular attention. Mr Rowe was dealing with sophisticated players who travel the world, not an isolated family that rarely leaves home for a holiday.

This highlighted the truth that despite the much-touted efforts of the Tourism Authority of Thailand (TAT), many people around the world still think of Phuket as solely a component of “Destination Thailand”, and not as a stand-alone destination itself.

This flies in the face of years of positive promotion of “Brand Phuket” as a unique tourism destination, and the ongoing push to develop more direct flights to the island.

For Phuket, the challenge now lies not in carving out our own identity to stand apart from Bangkok – that has already been done. We are Phuket. But what the champions of Phuket have yet to achieve is to overcome the Bangkok-centricity that permeates our markets both in and outside of Thailand. That mentality is nourished daily by the central government and throughout the “national” media.

Well-travelled international athletes playing on a world tour didn’t know that Bangkok has two airports, one flooded and one not. They didn’t know that there is no flooding at all in Phuket or elsewhere in the south of Thailand. And they didn’t seem to know that Phuket International Airport is just that. Perhaps this speaks unfavorably about the competence of the nation’s government-dominated PR apparatus.

In their consequences, the far-away floods are reminiscent of the damage to this province during the political violence in Bangkok last year when more than 100,000 tourists cancelled their bookings to Phuket because of localized turmoil about 1,000 kilometers north of here.

Although tourist arrivals into Phuket for the first eight months of this year were running well ahead of the same period last year, and might even have been favorable for last month (October), one can only speculate on what October’s arrivals might have been had the world known that Phuket was (with the exception of some shopping shortages): a) not significantly affected by the floods, and b) easily accessible by air, both through Bangkok and directly.

Perhaps Thailand’s tourism marketing gurus will have taken note of this. But then perhaps they, too, are Bangkok-centric.