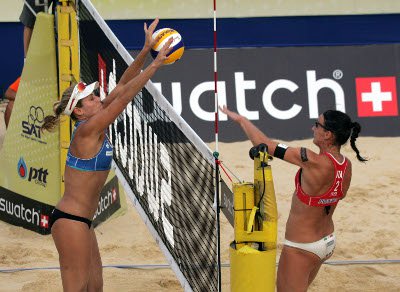 PHUKET: China’s top-seeded duo Chen Xue and Xi Zhang will take on the second-seeded team of Jennifer Kessy and April Ross from the United States in the gold medal final of the FIVB Beach Volleyball World Tour at Karon Beach this afternoon.

Both teams ground out semifinal match victories yesterday to advance to the internationally-televised final, scheduled to start on center court at 4pm today. Their game will be preceded by bronze medal contenders Australia and Italy at 3pm.

Both teams going for the gold today are former Phuket champions. Although Kessy/Ross won their last meeting in two sets in June at the Beijing Grand Slam, Xue/Zhang hold a 6-2 series edge over the Americans.

Kessy/Ross held off a formidable challenge by Italy’s Marta Menegatti/Greta Cicolari, the fifth-seeded team, winning in two sets, 21-18, 21-19 in 44 minutes.

After finessing their way through a tight first set, Kessy/Ross fought back from a 12-16 deficit in the second set to defeat the tenacious Italians.

Seeded second in the ongoing Phuket FIVB tournament, Kessy/Ross yesterday played in their 30th FIVB Swatch World Tour final four playoffs and today will be their 19th appearance in a gold medal match.

The former Phuket champions have also won 26 medals in the five seasons they have played together.

“The Italians played well, we just came up with key plays at the right time to send us to the gold medal match again here in Phuket,” said Kessy.

“They played better in the second set and after we got done by four points late in the set, we didn’t panic and both of us were able to make the kind of plays we are capable of, especially with our transition setting.

“We knew it would be a battle and it was, and they are a team getting better and better, but we used our strengths to defeat them,” she added.

In the other semifinal yesterday, Xue/Zhang overcame a knee injury to Zhang early in the second set to win their fifth straight match in two sets in Phuket, defeating Australia’s 19th-seeded Louise Bawden/Becchara Palmer, 21-18 and 2-13 in 43 minutes.

After controlling the first set, the score was tied 1-1 in the second set when Zhang went down hard on the Karon Beach sand, injuring her left knee. After on-site medical personnel treated her, Zhang, playing in obvious pain with a taped left knee, and Xue pulled away to earn their 20th FIVB Swatch World Tour gold medal match appearance.

While the seriousness of Zhang’s knee injury remains uncertain, the Chinese team is in their 35th final appearance and have 29 medals, including eight gold medals in the 67 tournaments they have played together since 2006. This season, the Chinese duo won the gold medal at the tour stop in Finland for their sole win of the season.

“Zhang is a strong person and I know she was playing in a lot of pain in her knee in the second set but we were able to stay focused, make plays and pull away for the victory,” Xue said.

“It was a close first set and we won and then in the second [set] I didn’t know what would happen after Zhang went down on the sand. She came back and made some great plays and I served very well; that helped us win the match.

“She has had problems with her knee before and hopefully she will be fine [for the final] because we would really like another gold medal,” Xue added.

The Phuket Thailand Open is being produced by Pentangle Promotions Co Ltd of Bangkok, in association with the FIVB and the Thailand Volleyball Association.

The Phuket Gazette and PGTV are charter sponsors of the FIVB Volleyball events in Phuket.