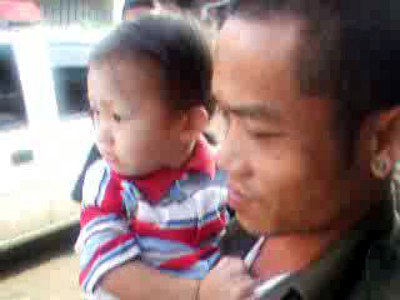 PHUKET: Police have launched an investigation in Phuket to discover the parents of a baby boy found slightly bruised but otherwise healthy in the flat-bed of a pick-up truck this morning.

Phuket City Police and members of the Ruamjai Rescue Foundation responded to a call at 8am from Wichit Moo 3 village headman Udom Nokseekaew reporting he had found a baby boy about 7 to 8 months old.

“I found the baby playing in the back of a pick-up truck on Kwang Road late last night,” Mr Udom said.

“When I first saw him, he was naked and playing in the back of a pick-up. He had bruises, some scratches and mosquito and insect bites over most of his body,” he added.

Mr Udom took the baby home, where his wife bathed him, applied first aid and then fed him some milk.

“He didn’t cry much at all. It seemed like he was just very hungry, and he began smiling after drinking the milk,” he said.

Mr Udom said that the baby boy had a fair-skinned, East Asian appearance.

“There are many Korean, Chinese and Burmese people living in the neighborhood. The boy was probably sick, which might have led his parents to abandon him,” he added.

Phuket City Police said that the baby was taken to Vachira Phuket Hospital to be checked while they begin an investigation to find his parents.