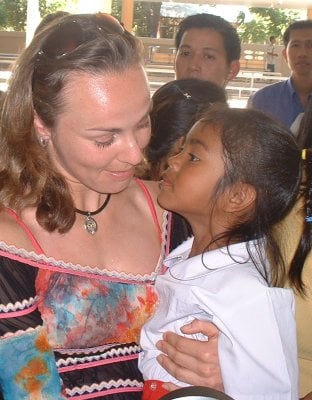 PATONG: Former world number one tennis player Martina Hingis was moved to tears today as she heard about Phuket children’s experiences in the tsunami.

The tennis star visited the kindergarten of Patong Municipality School while on a whistle-stop tour of Phuket, arranged by the Tourism Authority of Thailand (TAT) to promote tourism after the tsunami.

After meeting the children – and hearing that some had been orphaned by the tsunami – Ms Hingis autographed tennis balls and racquets as gifts for them.

Ms Hingis was welcomed to Patong by Chaipak Siriwat, the Deputy President of the Lawn Tennis Association of Thailand, and Suwalai Pinpradap, director of the TAT Southern region 4.

After heading to Klong Pakbang, Patong, where she walked on the sand – which she described as “like powder”, Ms Hingis told K. Chaipak, “It’s amazing, and almost unbelieveable that this beach was hit by the tidal waves.This beach is still beautiful.”