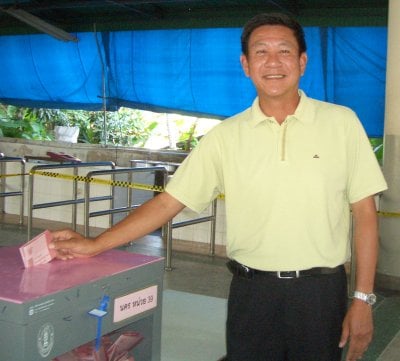 PHUKET: Despite a massive campaign by Thai Rak Thai (TRT) to convince voters to back the ruling party, and despite surveys showing that Prime Minister Thaksin Shinawatra’s popularity is at unprecedented levels, Phuket yesterday reinstalled its two Democrat MPs.

Indeed, Phuket voters made it quite plain that they are not ready for TRT MPs, by handing the two Democrats hefty victories.

A total of 3,002 papers were spoiled, while 2,743 electors marked their papers to show that they did not want to vote for either District 1 candidate.

Turnout in District 2, which covers the rest of Phuket, was slightly lower, at about 77%, but again the voters handed the Democrats a convincing win, with incumbent Chalermluk Kebsub receiving 43,295 votes compared with 27,222 for TRT candidate Wisut Santikul.

Results are still subject to confirmation.