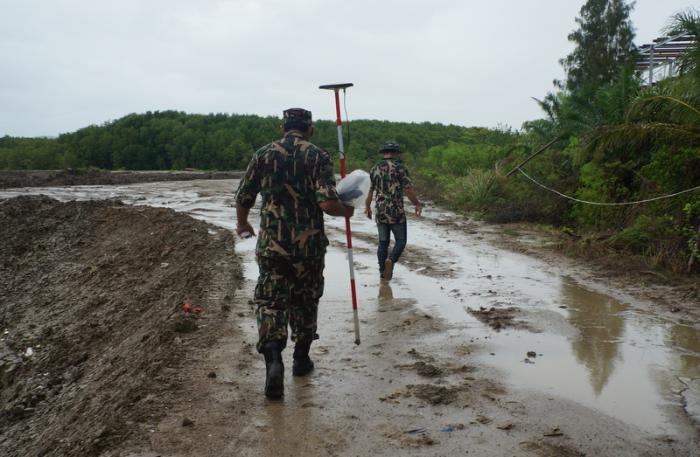 PHUKET: Ten land owners are being charged after a Department of Marine and Coastal Resources (DMCR) team investigated 24 plots of land for alleged mangrove encroachment on Phuket.

The investigations are part of a nationwide operation to reclaim ‘national treasures’ across 24 provinces. The team will inspect a total 34 plots of land covering about 2,200 rai on the island (story here).

“These plots include golf courses, marinas and shrimp farms. We have called for support from relevant authorities on the island in order to work on this mission,” Mr Sakda told the Phuket Gazette today.

“At this stage, based on our aerial photography, I am standing right in the mangrove forest, according to our map and aerial information,” Mr Sakda said while inspecting the land at the RPM.

RPM Managing Director Sarayuth Mallam presented land title deeds to the team, insisting that the 180 rai of land at the RPM were legally owned by them.

“I have no problem with the inspection as the officers are just doing their job. We have been doing business here for many years, and everything we do is legal and above board,” Mr Sarayuth said.

Officials believe a man, named only as ‘Thawat,’ was involved the sale of the land documents.

“Mr Thawat is involved in selling of land title deeds to private businesses, Thai and foreign, in Phuket,” Mr Sakda said. “Each of those plots are located in protected areas, which are not meant to be privately owned.”

Mr Sakda said that land owners were welcome to present their land documents, but they would have to be verified by the Land Department.

“If the documents were unlawfully issued, we will turn the case over to the Land Department in order to revoke the titles.”

Mr Sakda said that he was just doing his job and this this was not a personal vendetta against anyone.

“It doesn’t matter who owns the land. From what I hear, some owners are ‘well connected’ to ‘influential people’ in the country. It will be disheartening to me if those people support the land owners in any kind of unlawful activities,” he added.