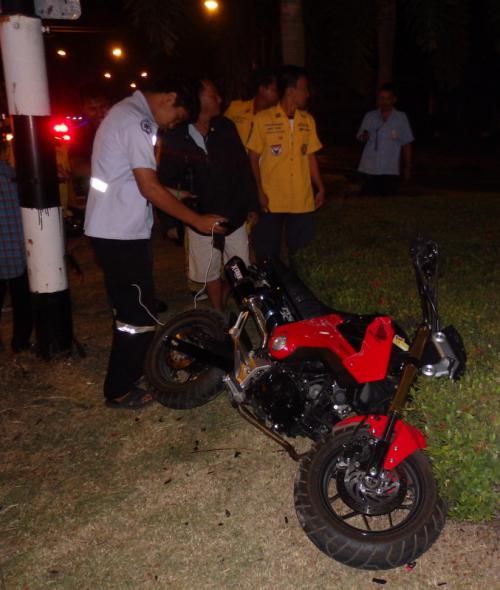 PHUKET: A teenager became the sixth person to die during Phuket’s 10 Days of Danger when he crashed his new motorcycle in Thalang last night.

Thanawat Tohting, 19, was travelling at high speed northbound on Thepkrasattri Road when the traffic light at the intersection with the airport road changed to yellow, witnesses told police.

Mr Thanawat increased his speed to make it through the light, but the car in front of him braked to stop, said Capt Narong Muangdoung of the Thalang Police.

“Mr Thanawat had to brake suddenly, lost control of the bike and veered into the median. On impact, he flew off the motorbike and struck his head against the traffic light pole,” said Capt Narong.

Mr Thanawat was not wearing a helmet at the time of the accident, but was still alive when Kusoldharm Foundation rescue workers reached him just after 11pm.

They administered first aid and transported him to Thalang Hospital, where staff tried for an hour to stabilize him before sending him to Vachira Phuket Hospital, where he died shortly after arrival.

Police are waiting for test results to see if alcohol was involved in the accident.

Although Mr Thanawat is the sixth victim in Governor Maitri Inthusut’s 10 Days of Danger, which began on December 25, he is the fourth victim recorded by the Department of Disaster Prevention and Mitigation (DDPM), which is counting deaths only during the national 7 Days of Danger period, which began on December 27. (The DDPM has yet to include Mr Thanawat in their statistics.)

The road deaths reported so far in the 10 Days of Danger safety campaign are: