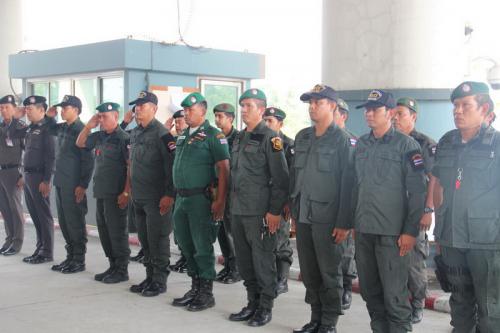 PHUKET: The number of police manning the land-security gateway to Phuket, Tah Chat Chai checkpoint, has been doubled in order to ensure the safety of residents and visitors during Phuket’s high season.

Of the 20 police officers, 12 are stationed to randomly check island-bound vehicles and eight have orders to check vehicles departing the island.

The heightened security at Tah Chat Chai checkpoint, as well as that at Phuket International Airport, is part of annual measures taken to ensure the safety of tourists during the high season, and not a direct response to the car bomb found in Phuket Town earlier this month (story here), confirmed Tah Chat Chai Police.

“We are concerned about the bomb that was found in Phuket. However, the heightened security measures are part of our high season crackdown to promote a crime-free island for tourists,” said Col Nathapakin.

“We want to prevent all forms of crime on the island,” he added.

As part of the boosted security measures, the top cop for the region inspected the island.

“We are responsible for seven southern provinces. All of these provinces have many tourist destinations, so the safety of our tourists is of top concern,” Police Region 8 Commander Panya Mamen said.

The Tah Chat Chai checkpoint and Phuket Airport are the arrival gates for many of the people flooding onto the island for New Year festivities, Lt Gen Panya said.

“It is possible for criminals to use those points to enter and leave Phuket,” Lt Gen Panya said.

Since Christmas Day, 58 illegal taxi drivers and two drunk drivers have been arrested at the Tah Chat Chai checkpoint. Additionally, 75 traffic offenders have been ticketed by the officers there, Lt Gen Panya said.

Tah Chat Chai Police, police volunteers and local administrative officers are working together to boost the security at the checkpoint, said Col Nathapakin.

“If there are any reports of taxi drivers threatening tourists, we will prosecute the driver,” Lt Gen Panya added.