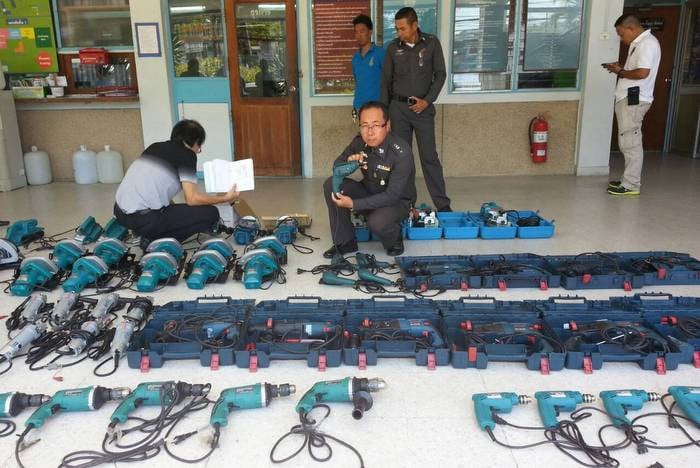 PHUKET: Police arrested a teenager yesterday for illegally importing and attempting to sell power tools worth more than 50,000 baht.

Sarawut Boonlai, from Nakhon Phanom, was arrested in possession of 65 different power tools – including planers, grinders, circular saws, and orbital sanders – after police received a tip-off that he had been selling the tools on the sidewalk of Soi Lim Sui Ju, near Nimit Circle (also called Seahorse Circle) in Phuket Town.

“We raided his sidewalk shop along with Customs officers and found tools worth more than 50,000 baht. Most of the contraband was imported from China,” said Lt Col Panya Chaichana of the Phuket Marine Police.

“We asked to see his import and export documents, but he was unable to provide them.”

Customs officers were able to confirm that the goods were imported, added Lt Col Panya. They included brands such as Makita, Boss and Bosch.

“Mr Sarawut confessed that he had imported the goods without paying the necessary taxes,” Col Panya said.

Mr Sarawut was charged with possession of untaxed power tools with intent to sell, under the Customs Act BE 2469, Section 27, which carries a fine quadruple to the duty-paid value of the goods, up to five years in prison, or both, Col Panya confirmed.

Police seized the goods, which are now being kept at Phuket City Police Station as evidence.

“The case has been handed over to Phuket City Police,” said Col Panya.