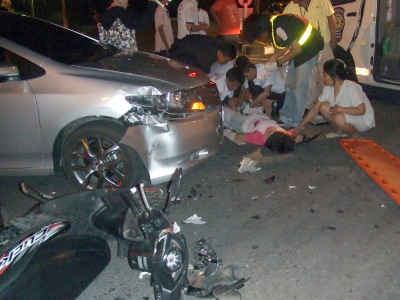 RASSADA, PHUKET: A 16-year-old girl was seriously injured after she allegedly jumped a red light on her motorcycle and was hit by a car in Phuket yesterday.

Shortly before midnight, Phuket City Police Inspector Chaliao Thaihoo received a report of an accident at the Narisorn Intersection on Surin Road in tambon Rassada.

Lying in the middle of the intersection he found Suwipha Rueangmonthop lying on the ground crying loudly, her mother by her side.

Miss Suwipha’s right leg was cut open to the bone, and her left arm and leg appeared to be broken.

Kusoldharm rescue workers performed first aid on her and rushed her to Vachira Phuket Hospital.

Phuket resident Prasert Saelim, 41, was the driver of the car. He told Capt Chaliao that he pulled into the intersection on a green light to turn onto Surin Road when Miss Suwipha came flying through a red light in the opposite direction.

He smashed into the motorcycle, which sent Miss Suwipha flying. He called the police immediately.

Capt Chaliao said he had taken photographs of the scene and had asked Mr Prasert to give a statement.

He would question Miss Suwipha once she had recovered from her injuries to find out who was responsible for the accident, he said.

The minimum age to ride a motorbike in Thailand is 15, although it is not uncommon to see children as young as 10 operating motorcycles in the countryside and inside residential estates.

Miss Suwipha, who was riding without a helmet, was fortunate she did not suffer a head injury in the collision.