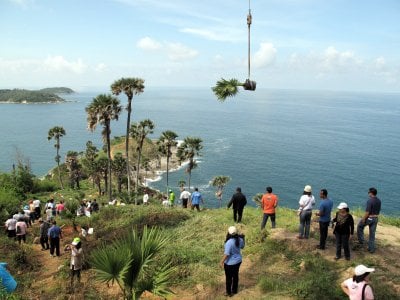 PHUKET: Phuket Governor Wichai Phraisa-ngop on Saturday led a group of Phuket VIPs in a tree-planting ceremony aimed at increasing the number of palm trees on Phuket’s iconic Phromthep Cape.

Governor Wichai said sugar palm trees have been recognized for centuries as the icons of Phromthep Cape.

The cape today is one of Phuket’s top tourist attractions, especially at dusk when people gather there to view sunsets over the western horizon.

However, the number of the trees on the popular peninsula has started to decline.

The newly-planted trees and seedlings will be watered through a system of PVC pipes installed under the ground. The amount of water needed is large, working out to about 30 liters per tree daily, he said.

A team of specialists has been contracted to ensure the project is a long-term success.

“We also plan to plant other types of trees [here] next year,” said Mayor Aroon.