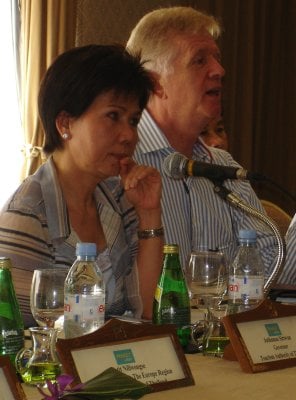 Many of them have in the past been less than impressed with the TAT’s support for the tourism industry in the tsunami-hit provinces, some vocally so.

But K. Juthamas came out of this morning’s meeting in one piece and smelling of roses.

A surprise pledge by K. Juthamas to push for Thai Airways International (THAI) to provide more direct international flights to Phuket, in particular to and from Hong Kong, Australia and Japan, all major sources of tourists for Phuket, eased the delegates’ concerns.

“It seems to me from what I have heard here that there are tourists who want to come, but there are no flights. If we see the potential from Australia, say, or from Hong Kong, instead of [using the TAT’s] budget for advertising, we [will] support THAI and you [will] do the marketing,” she suggested.

Laguna Phuket’s Joint Managing Director James Batt, who convened the meeting, described this as “a very good idea”, and explained to K. Juthamas, “We are all sitting here with the budgets to go out and do tactical advertising in these [markets].

“The difficulty is getting the flights. If we can give financial support [to THAI], then the rest of it will follow.

“In a way, [the TAT] is not even spending money within ‘Thailand Inc’ – the money’s going from one pocket [the TAT] into another [THAI]. It’s a beautiful solution.”

He said that if the TAT would cooperate with THAI, and if the hotels would work together with tour agents overseas, then this could break the current deadlock that sees THAI unwilling to make more seats available without having guarantees that it can fill them – and agents unable to book tourists for holidays because seats are not available.

“I will talk with my partner, Thai International,” K. Juthamas said, “to help give you more flights, but you have to tell me which routes you want first or second, and so on… I sit as an adviser to the board of THAI.”

Not everyone was as upbeat as K. Juthamas and Mr Batt, however. Maitree Narukatpichai, Owner’s Representative of the Hilton Phuket Arcadia, was dubious.

“We have been to a lot of meetings and until now, everything is still the same. I don’t see any impact for Phuket,” he said.

But the general mood was summed up by Evason General Manager Alasdair Junor, who said, “We’re here to move forward. I think that it’s a terrific strategy if we formalize it.”