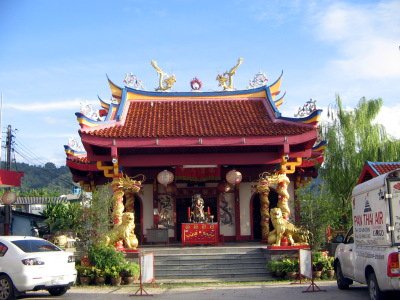 The cultural tours, conducted aboard 10-seat open-air buses known locally as po thong, will start from the TAT office on Thalang Road at 9am and 10am daily.

Those wishing to take part in the tours tomorrow are asked to register at the TAT office by 8:30am.

The tours are organized as part of the TAT’s efforts to ring in the Year of the Rabbit, the Chinese New Year that began yesterday.

Costing just 99 baht including lunch, the po thong will visit nine of the most famous Chinese shrines in and around Phuket Town before returning to the TAT office at about 3pm.

Reservations are on a first-come-first-served basis. Those wishing to apply can do so from 8:30am to 4pm daily.

The tours start tomorrow and run though until February 10. Space is limited to about 40 people aboard four buses daily.

Officially entitled “Worship 9 Chinese Shrines in Phuket by Po-Tong Local Bus,” the tours are being organized with cooperation from the Phuket Tourist Guides Association, Koh Phukej Magazine and the Thai Hua Museum.