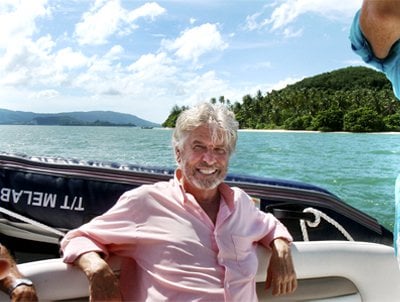 Mick collapsed as he arrived at Suvarnabhumi Airport early on Wednesday evening for a business meeting. Efforts to revive him at the scene and later in hospital were unsuccessful. It is understood he suffered a massive heart attack.

Born in south London at the height of the Blitz in World War II, Mick enjoyed a productive international career in the world of new technology, including the management of the first Apple store in the United Kingdom.

He and his partner, Carol Fryer, the secretary of the Phuket International Women’s Club, moved to Phuket in 1996 where they established A++ Software, pioneering accounting software for businesses in Thailand.

Mick was in Bangkok seeking to expand the operation when he died.

His friends remember Mick as “quiet” but “very sociable” and “with a dry sense of humor”. But he had another side in which he indulged his passions – Formula 1 racing. He will be remembered for the many years he and Carol hosted an open-house breakfast for up to 100 guests at their Thalang home on the day of the Australian Formula 1 Grand Prix.

A service and wake for Mick will be held within the next few days, finalised once details of family member arrivals from the UK are known.

Information regarding the ceremony will be posted on this site as soon as available.