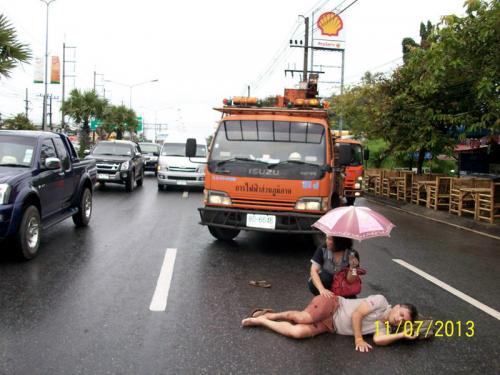 Carlo Somaini, 54, was about 300m north of the Heroine’s Monument riding north on Thepkrasattri Road when a motorbike emerged from a soi in front of him.

“He tried to avoid the motorbike, and lost control of his own motorcycle,” Lt Thani said.

Police and Kusoldharm Foundation rescue workers received the accident report at 1:30pm and arrived at the scene to find Mr Somaini lying near his motorcycle.

“His right leg was broken. We took him to Thalang hospital right away and then he was transferred to Bangkok Hospital Phuket,” Lt Thani said.

Bangkok Hospital staff reported to the Phuket Gazette today that Mr Somaini had surgery on his leg yesterday and is recovering well.