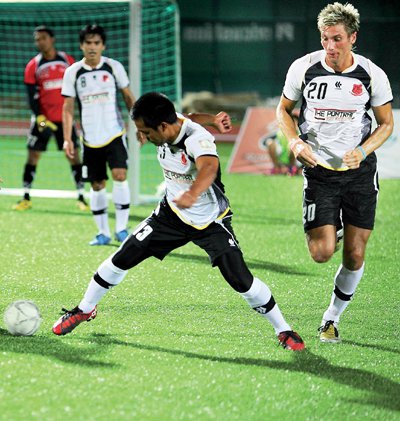 PHUKET: Cancelled and postponed games meant only two matches were played in round four of the Phuket Adult Futsal League presented by Thanachart Bank.

Despite only two games on the card, sixteen goals were scored to ensure an exhilarating night of football.

TSLC and SGS faced off in the first encounter with the home side looking to keep their unbeaten record having won their previous three games. A nervous start from both teams eventually gave way to a scoring spree by TSLC who opened their account midway through the first half.

SGS pushed for an equalizer and created a few chances, but the TSLC goalkeeper foiled them at every opportunity. As the half drew to a close, TSLC punished SGS with three breakaway goals in as many minutes to take a commanding four goal lead into the break.

TSLC continued the ‘guerrilla’ tactics throughout the second half, content to sit back and absorb the pressure before hitting SGS on the break with two more goals added by TSLC in this fashion. SGS did manage a consolation score, but TSLC were far stronger on the night, victorious on 6-1 scoreline.

Depleted squads for both teams meant little respite for players who ‘made the ball do the work’ at the cost of their usual dynamic exertions. Portrait started the more lively side, attacking Thalang at every opportunity. It was again a telling tactic as the reigning champions powered into a three-goal lead.

Thalang worked tirelessly to keep pace with the game, but struggled to match Portrait FC’s movement and fluidity. Portrait control of the game was consolidated with four more goals. Thalang Tigers grabbed a brace, but at the final whistle Portrait took the win on a 7-2 score line with Somsak bagging a hat-trick to bring his season’s tally up to 10.

For information on the AFL email football@thanyapura.co.th.