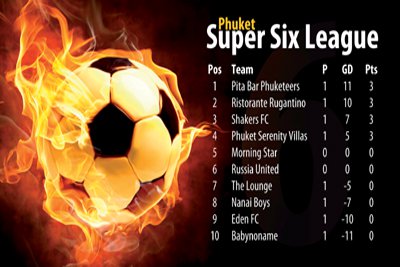 Alberto Mancuso’s Ristorante Rugantino began the net-busting frenzy by knocking Joseph Arimathea’s young Eden FC team out of the park on a 10-0 scoreline. The experienced Italian team took an early lead from a goal by Jacopo Jajo, and from there the Italian side gorged themselves at the goalscoring buffet.

The second match of the evening saw Shakers FC and Nanai Boys mix it up on the flood lit pitch. A strong start from Shakers was rewarded by goals from Ross Robinson and Tom Davies, and although the Nanai Boys fought back, Shakers FC team eventually ran out 9-2 winners.

The Lounge, managed by local football stalwart Billy Chima, met Phuket Serenity Villas (PSV) in the third game. Pre-match favorites, The Lounge players were stunned early on by powerful strikes from PSV’s German wunderkind Sascha Wondruschka. Norwegian midfield maestro Kyrre Amundsen clawed one back for The Lounge, but PSV held firm and took the points with a 7-2 victory.

In the final game of the evening, Pita Bar Phuketeers played the all-Thai Babynoname team. Despite early chances for both sides, the Phuketeers found their momentum with Yannik Christll and Carl Brain pillaging goals from the start. The onslaught continued and the Phuketeers ravaged a horde of 11 unanswered goals to put them top of the league.