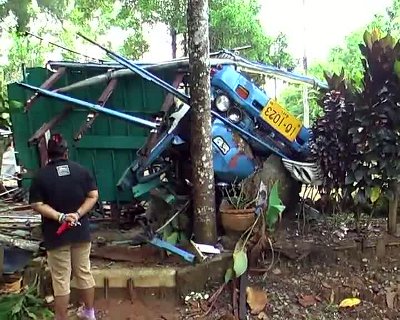 PHUKET: Five people returning from a Phuket cremation ceremony were killed on Saturday night when the crowded pickup they were riding in slammed into a tree in Phang Nga.

Sixteen others were seriously injured.

A songthaew (pickup modified for passenger transport) was returning Buddhist adherents from the cremation ceremony of Mai Khao Temple Abbot Luangpor Daeng when the accident occurred in Tai Muang District just after 11pm.

The songthaew, driven by 49-year-old Venus Siangdung, was traveling along Petchkasem Road when it was allegedly cut off by a dark BMW 525i sedan, survivors said.

Mr Venus lost control of the vehicle, which crashed full force into a roadside tree.

Local resident Somboon Sanguansakul, 54, said he was resting at home when he heard a loud crash, followed by cries for help.

He immediately called Tai Muang Police after finding the overturned pickup, with scores of dead and injured, outside his home.

The wooden passenger compartment of the songthaew (literally “two rows of benches”) was splintered by the force of the impact and was unable to protect passengers when the vehicle overturned.

Workers from the Phu-In Rescue Foundation and other nearby rescue units raced the 16 survivors to Tiai Muang, Phang Nga and Vachira Phuket hospitals for treatment.

About five meters away, police found the BMW wrapped around a roadside utility pole.

Mr Danuphon, a resident of Takuapa district, was taken into custody by District Police.

Both he and Mr Venus were charged with reckless driving resulting in death.

All were residents of the same village in Thung Maphrao subdistrict, Tai Muang.

The curved stretch of the undivided highway where the accident occurred is lit with light poles on both sides every 40 meters, yet is still a common accident site, local residents said.

The accident is the second five-fatality car crash in Phang Nga this month, following a collision that claimed the lives of four young Swedes and their Thai driver on February 1.