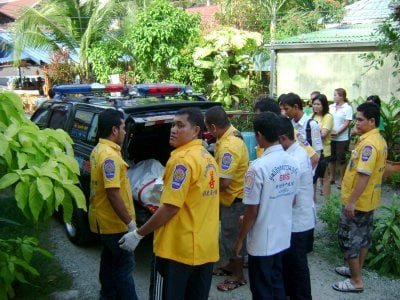 PHUKET: Police in Phuket are investigating the death of a Swedish man whose body was found in his rented room at Cherng Talay yesterday.

His next of kin in Sweden have been notified of his passing, Swedish Embassy officials confirmed today.

Mr Basualto Trincado’s body was found hanging by the neck from the inside doorknob of his rented room on the second floor of an apartment block near Bang Tao Beach.

Although the body had several large lesions on the forearms and legs, police said there were no signs of struggle inside the room.

Apartment owner Kordetch Komkong said he used a master key to enter the room at about noon after he noticed an unusual odor emanating from within the room.

Police estimated the time of death as 14 hours before they arrived. Cherng Talay Police were notified of the death about 2:40pm yesterday.

Officers found his passport and other personal documents in a backpack inside the room.

Mr Kordetch said Mr Basualto Trincado contacted him the day before, Christmas Day in Phuket, asking to rent a room.

Upon check-in, said he did not have his passport or other identification, said Mr Kordetch.

Although the Swede appeared absent-minded and listless, he decided to allowed him to take the room anyway, Mr Kordetch added.