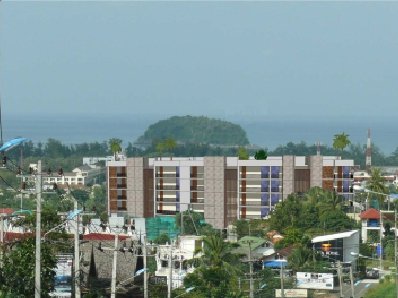 PHUKET: Following complaints by local residents, developers of a condominium project in Phuket have agreed to not build the top two storeys of the apartment block to preserve views over Kata Bay.

The environmental impact assessment (EIA) of the Kata Royal Condo project on Patak Road was originally approved for seven storeys.

However, when local residents realized the structure would block the view of Koh Phu (Crab Island) from the road over Kata Hill, they staged a protest and lobbied the Phuket Provincial Office to review the EIA approval process.

A work stoppage order was issued by Karon Municipality pending investigation of the matter.

The EIA was upheld by the Phuket office of the Ministry of Natural Resources and Environment, but the decision whether to lift the construction ban rested with Karon Municipality, which refused to rescind the stoppage order until receipt of a letter from a provincial review board signed by the governor.

Although the construction was deemed legal in every respect, the developers finally agreed not to go ahead with the final two floors of the project.

At a meeting among local officials and company representatives chaired by Vice Governor Nivit Aroonrat late last week, the developers said they were prepared to shelve plans to complete the project according to the original design.

Among those attending the meeting was Karon Mayor Thawee Thongcham.

The developers also presented computer graphics showing an artist’s conception of how the project would appear from atop Kata Hill road with just five storeys.

Under the new design, Koh Phu would appear to float just above the finished structure.

However, once motorists began their descent they would quickly find the view obstructed by the building.

Pimpa Phitya-isarakul, executive director of the project, said, “We understand what villagers feel and have agreed to save the iconic view of Koh Phu. We are visitors. We will be happy if local people are happy.”

Asked how much the truncated design would cost the company in terms of lost sales, she said it was too early to know whether the project partners would be able to recoup their investment.

Despite the concession made by the developers, local officials fear residents may insist the project be scaled back even further.

Village representative Chalong Loysamut said, “I will let the villagers consider this new plan and discuss whether we are pleased with the offer. But I don’t think we will accept it because we told them before that we would like to cut off two more [storeys] to offer a panoramic view of the area.”

“I would like to say to all of those concerned in the construction approval process that they should take greater care to protect the environment and develop sustainable tourism, rather than waiting for problems like this to arise and be fixed one-by-one.

“There won’t be anything left to save on this paradise island if we don’t start saving it now,” he said.