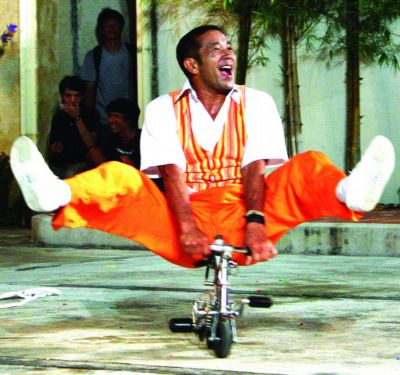 Whoever came up with the idea to host world-class street performers in the old quarter is to be given a great deal of credit as the performers provided just the right kind of entertainment that could be appreciated by every member of the family, young or old.

And because the performers relied more on movement and gestures than the spoken word, their art was perfect for an international tourist destination like Phuket.

Comment in the Gazette‘s online readers’ forum, often a repository of rote and rutted lament from disenchanted expatriates, was almost uniformly favorable. An extract from our favorite:

“Big surprise to me. This event actually seemed well planned, organized and efficient! Not only is it entertaining, it’s delightful in every respect – lovely mix of people and a relaxed feel. A big improvement over the Vegetarian Festival!”

The festival also provided a pleasant alternative to the stinking sewage, noise, parking problems, touts, tuk-tuks and drunks that dog the Patong Carnival, which was held concurrently.

But in some ways the unexpectedly large crowds in Phuket Town turned the fête into a victim of its own success. As anyone who attended on Saturday night can confirm, the huge turnout presented some problems, most notably Soi Romanee and other places where stages were set up in the middle of the street, blocking the flow of pedestrians.

Some have already recommended moving the festival to Suan Luang or Saphan Hin next year in order to take advantage of the greater area and availability of parking.

Of course it would be great to have more performances in those parks, but with a bit of tweaking, most of the issues that surfaced during this innaugural event could be overcome, and that the festival could well be developed into a signature event for Old Phuket Town.

There are already numerous events held at Suan Luang and Saphan Hin, and local residents in and around both areas have begun to complain of sanitation problems, security issues, ‘hospitality fatigue’ and a host of other problems. Few would complain if yet another large event is hosted elsewhere.

As mentioned by local TAT office director Bangornrat Shinaprayoon, this year’s event could not use Queen Sirikit Park as a main staging area, thereby forcing almost all of the activities into the very narrow Thalang Road.

If just two or three of the acts could be held inside the park and others set up in areas where they would not impede pedestrian traffic, Thalang Road could be more of an intimate walking street than a bottleneck for the masses.

The traffic jams of last weekend could also be largely avoided simply by using the Phuket Provincial Administration’s pink buses or other vehicles to shuttle in visitors from remote park-and-ride areas.

We hope very much to see the Phuket Street Show back again next year.