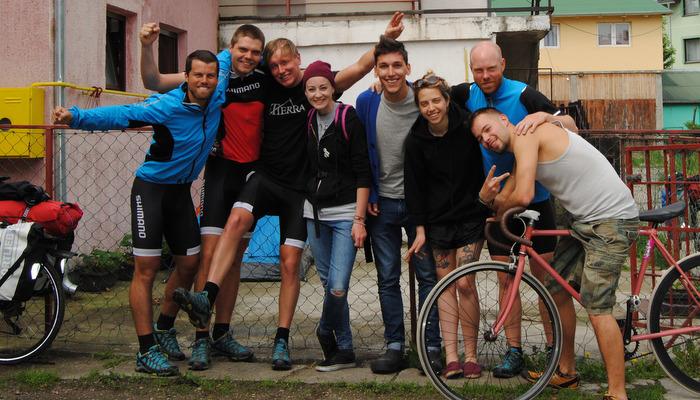 PHUKET: The four intrepid men biking their way from Sweden to Phuket to raise funds for the Barnhem Muang Mai orphanage in Phuket found themselves in a small Turkish village called Kandira yesterday.

With about 3,600 kilometers under their belts, and thousands more to tackle before crossing Sarasin Bridge, morale is still high for Calle Wollgard, Fredrik Jessen, Tomi Blumen and Christofer Johansson (story here).

“We still like each other, and I can’t see that will change for the next couple of weeks at least!” Mr Wollgard told the Phuket Gazette.

Prior to Kandira, the team had spent more than a week resting in Istanbul, Turkey. However, time came when the team was ready to get back in the saddle, still aiming to arrive in Phuket in time to enjoy Christmas with the orphans.

Mr Blumen was reported to have been suffering stomach issues during their rest, but pushed on with the team when it was time to move out – keeping up as they covered about 110km their first day back on the road.

Another mounting concern is Mr Johansson’s bike. Though its wheels are still spinning, it’s in “far from perfect shape”, explained Mr Wollgard.

“The temperature is now getting higher and higher. That, coupled with a lot of hills in Northern Turkey, is our biggest challenge right now,” Mr Wollgard confided.

The team is shooting to beat the heat as they travel through picturesque Northern Turkey by getting early starts to allow them to seek shade in the middle of the day.

“There is not much we can do about the hills, except conquer them,” Mr Wollgard said.

The next big challenge will be staying safe in the traffic throughout Teheran, Iran.

Those wishing to donate just need to send Mr Wollgard their name and how much they want to donate for each Swedish mile (10km) covered. All proceeds will go to Barnhem Muang Mai, which was founded in the wake of the 2004 Tsunami disaster by a Thai-Swedish couple.

Though Barnhem means “home for children” in Swedish, it is a home to many in need, often accepting single mothers with children and grandmothers with grandchildren who are unable to provide for themselves.

Mr Wollgard and his team can be contacted at callewollgard@gmail.com.

Toes to the nose: Surf comp success at Kalim Beach