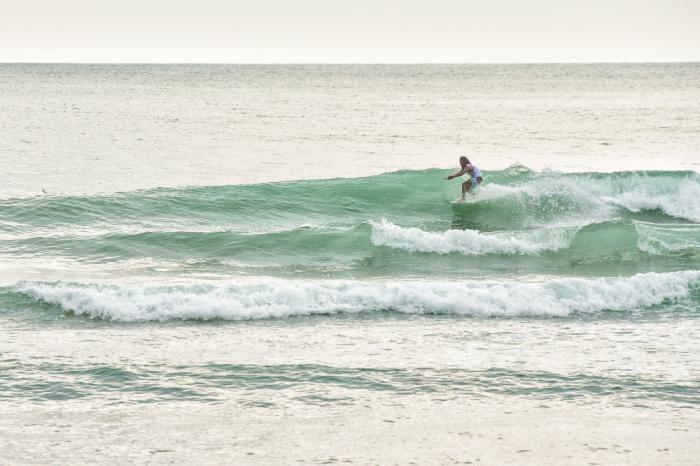 PHUKET: The monsoon arrived just in time for the first Pearl of the Andaman Longboard Classic hosted on the rocky coast of Kalim last Saturday.

A bit of afternoon rain and a military coup couldn’t keep 30 contestants and more than 40 spectators from turning out. A few days of consistent ground swell marched its way through the Andaman to meet the grateful surfers. Required to use boards nine feet or longer, surfers were able to line up far out and catch the peeling three to five-foot waves early for long nose-rides.

Judges vigilantly watched the contestants during the 15-minute heats on the lookout for those who chose the best – not necessarily the biggest – waves, and performed the most difficult and stylish maneuvers while maintaining the highest level of control. The most graceful bottom turns, powerful cutbacks, radical maneuvers and longest nose-rides earned the surfers top scores.

Somsak Kreechai (Malek) made the most out of the great conditions and high-scored his way through six heats as well as the quarter-finals, semi-finals and finals to take home the first place trophy and prize – a Firewire Timbertek Sub Moon 9.5. Second place went to Neung, third place to Decha Sithidej and fourth to Lee Patong, all of which took home striking oyster shell trophies and goodies donated by the sponsors.

“It started out a little bit in Kata and in that area. Then we had a surf series that was in Kata, Kalim and Kamala. A year later we had it in Patong and in Kalim – so it just hops around a little bit,” said Erwin.
“Surfing Thailand is the main force behind it with some local sponsors like Baan Andaman Sea Surf and Phuket Surf.”

For the next surfing competition, the Phuket surf-scene advocates have their sights set on a multi-day event with a women’s, grommets, shortboard’s, longboard’s and master’s divisions hosted in Patong in September. Stay tuned.