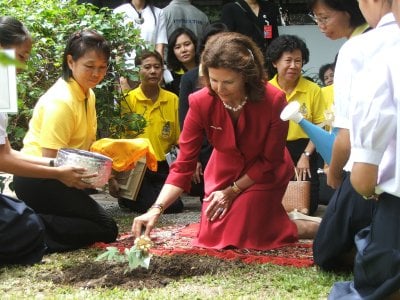 PHUKET: HM King Carl XVI Gustaf and HM Queen Silvia of Sweden this morning visited Satree Phuket School. Later in the day they were taken to the Tsunami Gallery at Bangkok Phuket Hospital.

Their majesties are staying in Phuket until tomorrow on a six-day unofficial visit after attending HM King Bhumibol’s Diamond Jubilee celebrations in Bangkok.

This morning at 11:30 am they arrived at Satree Phuket School to hand out grants to five students affected by the tsunami. They were also taken around the school’s tsunami exhibition.

Anchalee Vanich-Thepbabutr, President of Phuket Provincial Administration Organization, presented a gift of a shell painting and a pearl necklace to the King and Queen to mark their 30th wedding anniversary.

Following the presentation, the Director of Satree Phuket School, Kiatisak Pinlavas, took the King and Queen around the school’s plant museum and afterwards they planted a teak tree in the grounds.

“The visit of King Carl XVI Gustaf and Queen Silvia of Sweden has made the school and everyone in Phuket very proud,” K. Kiatisak added.

In the afternoon the royal couple were taken to the Tsunami Gallery on the second floor of Bangkok Phuket Hospital. They were also treated to a performance of Rong Ngeng, a traditional Sea Gypsy dance, by students from the Child Care Development Center at Kamala.

The Prince, a watersports enthusiast, spent his first day in Phuket sailing from the Royal Phuket Marina and then spent two days diving at Koh Maithon.

Ten deaf students from Phuket Special School turned out to see the Prince off at Phuket International Airport. The students had their photo taken with Prince Jigme and also taught him how to sign “I love you”.