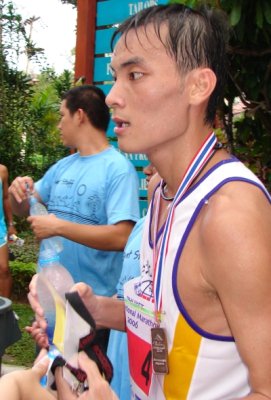 Boonchoo, from Chumphon, won the gold medal in the marathon in the 2005 SEA Games in Manila.

Boonthueng, of Buri Ram, also won gold in the SEA Games, coming in first in both the 5k and 10k events, and a a silver and a bronze in long-distance track events at the 2003 SEA Games in Vietnam.

Ko clocked three hours, 36 seconds for his victory. “The weather and the conditions were very difficult for me because there were many hills,” said the 27 year-old, who finished 22nd in the Italy Hill Marathon three years ago.

Some 2,000 runners from Thailand and many other countries in Asia took part in either the marathon or shorter events, including large contingents from Japan, Taiwan and South Korea.

There were also runners from as far afield as Australia, Europe and North America, including the woman’s full marathon winner Heather Gregg of the US, who completed the course in just under four hours.

Marketed under the slogan, “Run Paradise”, the competition was really a series of events, all starting and finishing at Laguna Phuket.

In addition to the 42.2-kilometer marathon course that went to Sirinat National Park and back, there was a 21.1-km half-marathon, a 10-km fun run and 1km “Kids Run”.

Trophies were awarded to the top three finishers in each age group and all finishers took home a commemorative medal.

About 60% of all the foreign runners were Japanese, led by “race ambassador” and former Olympic marathon runner Akemi Masuda, who now is a well-known sports commentator.

She is one of five members of the popular K-pop band Baby VOX, in addition to being a TV actress.

The exact race distances were measured and certified by the Association of International Marathons and Road Races (AIMS).

The races were organized by Go Adventure Asia Co, Ltd and Phuket Province, with support from the Tourism Authority of Thailand, Thai Airways and Laguna Phuket.