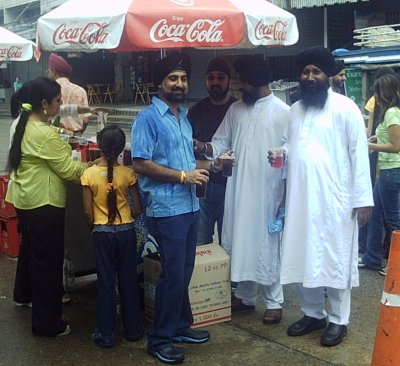 PHUKET CITY: The island’s small Sikh community yesterday marked a particularly special festival in their religion: the 400th anniversary of the martyrdom of the fifth Guru, Arjan Dev.

In 1606 Guru Arjan Dev was tortured, on the orders of Emperor Jahangir, by being boiled alive and then forced to sit on a red-hot iron plate, in an effort to make him recant his belief. When this did not work he was thrown into the River Ravi, where he died.

Each year, to commemorate his death – and the fiery torture that preceded it – Sikhs worldwide go out into the streets and give away cold drinks. In Phuket the community chose the fresh market in Phuket City as their venue to give away 200 bottles of cold drinks over a two-hour period.

Anan Singh, who took the photograph, said, “At first people were reluctant to take the drinks from us, thinking that we were selling them. But after we told them that this was a festival of the Sikhs to remember the great Guru Arjan Dev, they would smile gratefully and pick up a drink each.”