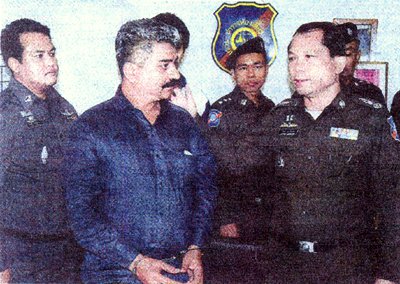 PHUKET CITY: An arrest warrant has been issued for a Pakistani man who failed to make a mandatory court appearance while on bail for attempted murder of a compatriot in Rawai in 2007, police say.

The suspect, identified as Imran Ahmed “Munna” Qureshi, was arrested by the Phuket Tourist Police in October 2007 for the attempted murder of fellow Pakistani Marmoon Iqbal Butt.

Mr Qureshi is alleged to have stabbed Mr Butt three times in the abdomen and once in the thigh as he was returning to his car after a party in Rawai.

The party was attended by members of Phuket’s Pakistani community.

Mr Butt was stabbed because he refused to pay up, Maj Bundit said at a press conference announcing Mr Qureshi’s arrest.

Mr Butt first reported being threatened by the gang to Kathu Police on August 2, 2007.

The gang were angry that Mr Butt spoke to the police, said Maj Bundit.

Mr Qureshi, whose name was misreported in the original account, was just a henchman, not the gang leader, he added.

Maj Bundit declined to give more information about the incident at the time.

Mr Qureshi was granted bail and remained in Phuket, where he operated a restaurant with his Thai wife until his disappearance.

Lt Col Jirabhop Bhuridej, current Inspector of Investigations of the Phuket Tourist Police, confirmed that Mr Qureshi failed to make a scheduled court hearing in May and that his lawyers have told the court they do not know his current whereabouts.

A warrant for his arrest was issued by the Phuket Provincial Court.

Mr Butt told the Gazette last week that he lives in fear for his life.

He only recently returned to Patong from Bangkok to run his Ali Baba chain of restaurants, he said.

He said he wanted to thank the Kathu Police for assigning officers to protect him on his way to and from work.

Mr Butt thinks Mr Qureshi is hiding out in Malaysia or one of the southern border provinces, but fears he could return at any time.

Lt Col Jirabhop said the Tourist Police investigation has no information indicating Mr Qureshi was in the Deep South.

“I think he is still in Phuket,” he said.

Mr Qureshi might be hiding out in his wife’s home province of Nakhon Sri Thammarat or in Phang Nga’s Thai Muang District, he said.

He declined to reveal more information, except to say that the two men had a longstanding relationship that went back over 20 years when they both lived in Pakistan.

The Special Branch is the intelligence arm of the Royal Thai Police, serving in many ways as the Thai equivalent of the US Federal Bureau of Investigation, he explained.

There are five Special Branch officers in Phuket, he said.