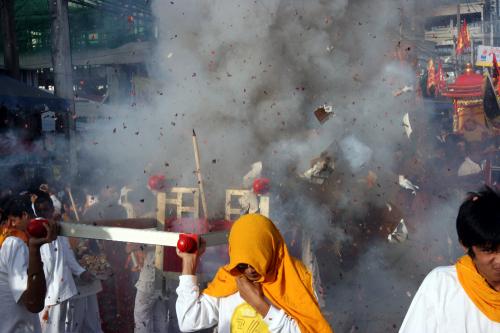 PHUKET: Officials agreed on Wednesday to adapt extra measures to control the use and sale of fireworks during the Vegetarian Festival next week, with special emphasis on keeping particularly loud and quick-to-ignite pyrotechnics off the streets.

The small red strings of firecrackers will be allowed, said Chaiwat Taephee, Phuket Provincial Chief Administrative Officer (Palad). But only at shrines and during parades.

Officials will be conducting sweeps to make sure that illegal firecrackers, such as “the giant egg”, free-standing rockets and bah jang, which detonates quickly, are not sold or used.

“Last year, a lot of teenagers threw bah jang at trucks. Striking a gas truck with one of those could be calamitous,” Mr Chaiwat said.

Officials are also concerned about noise, and want to make sure that people are not unduly disturbed or worse yet, suffer ill-effects to their health, such as heart attacks from sudden startling – by particularly noisy fireworks.

Teams of officials made up of district chiefs, police officers, village headmen and volunteers will operate in each of Phuket’s three districts, informing residents and vendors in their area, Mr Chaiwat said.

“I have ordered officers to check shops in every area to find those that are selling illegal firecrackers,” said Sermpan Sirikong, Phuket City Police Superintendent.

“Anyone selling illegal fireworks, or disturbing people by setting them off outside of prescribed areas will be warned. If we catch them a second time, we will press charges against them,” Col Sermpan said.

Officials also plan to deploy undercover officers to ensure residents and tourists are safe in busy areas on October 13, the last day of the festival, which starts on October 5.

Gunman Dj Bee on the run