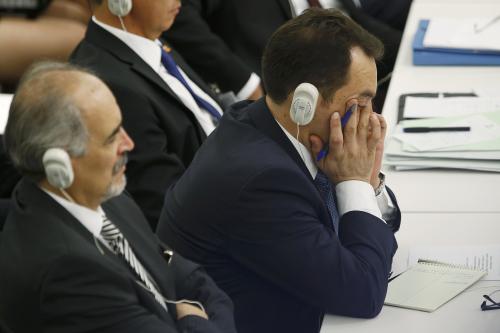 Samantha Power, the U.S. ambassador to the United Nations, said a deal was struck with Russia “legally obligating” Syria to give up its chemical stockpile and the measure would go to the full Security Council on Thursday night. Russian Foreign Minister Sergei Lavrov said an “understanding” had been hammered out.

The United States had been negotiating on the sidelines of the U.N. General Assembly with Russia, Syrian President Bashar al-Assad’s chief ally. The aim was to craft a measure to demand the destruction of Syria’s chemical arsenal in line with a U.S.-Russian deal reached earlier this month that averted American military strikes on Syria in the midst of Syria’s civil war.

Western powers on the Security Council backed away from many of their initial demands, diplomats say, in order to secure Russia’s approval.

A major sticking point between Russia and Western powers was whether the resolution would be under Chapter 7 of the U.N. charter, which covers the council’s authority to enforce its decisions with measures such as sanctions or military force.

The compromise draft resolution, seen by Reuters, makes the measure legally binding but provides for no means of automatic enforcement with sanctions or military force. Originally, the United States, Britain and France had wanted the resolution to state explicitly that it was under Chapter 7.

The only reference to enforcement in the draft is a threat that if Syria fails to comply with the resolution, the council would impose punitive measures under Chapter 7, which would require a second resolution that Russia could veto.

A U.S. State Department official hailed the deal as a “breakthrough.”

“The Russians have agreed to support a strong, binding and enforceable resolution that unites the pressure and focus of the international community on the Syrian regime to ensure the elimination of Syria’s chemical weapons,” the official said.

The U.N. Security Council will hold a closed-door session to debate the issue at 8 p.m. (0000 GMT), the French delegation said. A vote on Thursday was not expected, one diplomat said.

Diplomats from the permanent Security Council members – China, Russia, the United States, France and Britain – had been haggling over the details of a resolution to back the American-Russian accord announced on September 14 in Geneva to eliminate Syria’s chemical weapons.

Assad agreed to destroy Syria’s chemical weapons in line with the U.S.-Russian agreement in the wake of that sarin gas strike on civilians in the suburbs of Damascus last month – the world’s deadliest chemical arms attack in 25 years.

Washington has blamed Assad’s forces for the attack, which it said killed more than 1,400 people, and President Barack Obama threatened a U.S. military strike in response.

Russia and Assad have blamed the attack on rebels battling to overthrow him in a civil war that, according to the United Nations, has left more than 100,000 people dead.

A senior U.S. official said earlier that the United States and China – another permanent Security Council member – strongly agreed on the need for the council to quickly adopt a binding resolution on eradicating Syria’s chemical arsenal, a remark that appeared aimed at putting pressure on Russia to accept the measure.

Russia at first appeared unswayed. When asked earlier in the day if diplomats were close to a deal on a Syria resolution, Lavrov told reporters at the United Nations, “Russia’s very close, the U.S. is not.”

U.S. Secretary of State John Kerry met Chinese Foreign Minister Wang Yi for about an hour on the sidelines of the annual gathering of world leaders at the United Nations.

“On Syria, both ministers were in strong agreement on the need for a mandatory and binding U.N. Security Council resolution,” said the senior U.S. official, speaking on the condition of anonymity, after the meeting.

“They discussed the value of unity among the P5 (five permanent members of the Security Council) and both felt it is important for the council to act quickly and for OPCW (Organisation for the Prohibition of Chemical Weapons) to similarly act quickly,” the official said.

China has backed Russia to veto three council resolutions since October 2011 that would have condemned Assad’s government and threatened it with sanctions.

Western diplomats say that Beijing has little reason to support Assad but is eager to ensure Russia will continue to back it in the Security Council on issues like North Korea.

“China follows Russia on Syria,” a Western diplomat said on condition of anonymity.

Assad’s government last week disclosed to a U.N.-backed weapons watchdog the extent of its arsenal, meeting the first deadline of the ambitious disarmament deal that calls for the weapons to be eliminated by June 2014.

Deputy Foreign Minister Sergei Ryabkov said on Thursday that Russia is ready to help guard Syrian chemical weapons sites and destroy Assad’s stockpiles but will not ship any of the chemical arms to Russia for destruction.

Ndegwa Muhoro, director of Kenya’s Criminal Investigation Department, said the so-called red alert for Lewthwaite is not related to the attack by Somalia’s Islamist al Shabaab militants on the Westgate mall in Nairobi that killed at least 72 people.

“The ‘red alert’ has nothing to do with Westgate. Her role in this attack is yet to be confirmed, but she is wanted on charges of possession of explosives and conspiracy to commit a felony,” Muhoro told Reuters.

The alert was issued as Kenyan police broadened the investigation into the weekend raid claimed by the al Qaeda-aligned Somali al Shabaab group, the worst such assault since the U.S. Embassy was bombed in the capital by al Qaeda in 1998.

Kenya said that it requested the so-called “red alert” notice for Samantha Lewthwaite, 29, on Wednesday. Interpol has joined agencies from Britain, the United States, Israel and others in the Kenyan investigation of the wrecked mall.

Lewthwaite, the widow of one of the suicide bombers who attacked London’s transport system in 2005, is believed to have evaded arrest two years ago in the port city of Mombasa, where she is wanted in a plot to bomb hotels and restaurants.

“The ‘red alert’ has nothing to do with Westgate. Her role in this attack is yet to be confirmed, but she is wanted on charges of possession of explosives and conspiracy to commit a felony,” Ndegwa Muhoro, director of Kenya’s Criminal Investigation Department, told Reuters early on Thursday.

Muhoro said she is wanted in a case related to another Briton, Jermaine Grant, whom police suspected of having ties to al Sh