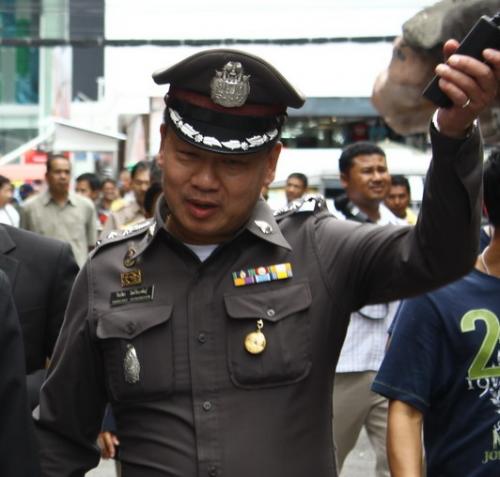 PHUKET: Police suspect Dj Bee and his two alleged accomplices in the gunning down of man in Phuket’s party town of Patong on Sunday have fled the island.

“The court issued an arrest warrant yesterday for Wanchit Sornsaree (also known as Dj Bee), Tookta Saleekoop and Moe Than Daroo for attempted murder and the possession of an illegal firearm and ammunition,” said Patong Police Superintendent Chiraphat Pochanaphan.

“However, we suspect that the three of them have already fled the island,” Col Chiraphat said.

Police were able to identify the suspects from witness accounts and clear CCTV footage from the scene of the crime, a shirt shop on Rat Uthit 200 Pee Road in Patong (video report here).

The dispute that led to Worrawut Thaweeapideeserm being shot in the shoulder with a homemade gun by Dj Bee was originally thought to stem from a complicated love situation. However, it has since been revealed that Mr Worrawut was shot over a business dispute (story here).

Mr Worrawut’s relatives have posted a reward of 200,000 baht for anyone who can provide information leading to the arrest of Dj Bee.

Police ordered to carry out weekend blitz on crime