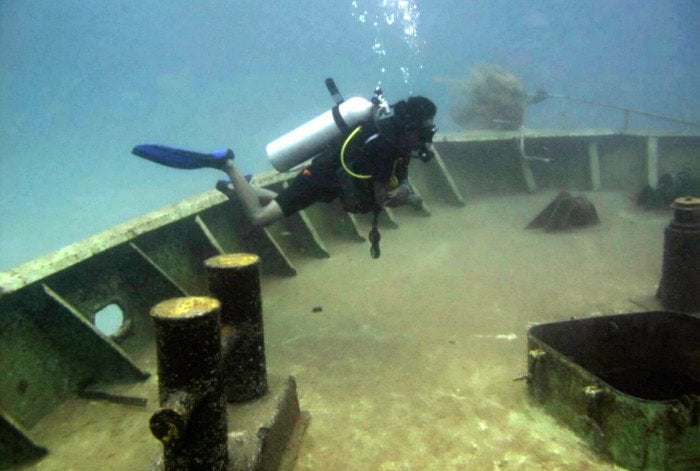 PHUKET: A large section of the Cambodian-flagged cargo vessel that sank near Coral Island has been moved to Koh Racha Yai in the government’s effort to support the scuba diving industry in Phuket and Krabi.

The piece of Sinaran Andaman was placed on sand at a depth of about 30 meters, far from where it could impact coral reefs in the area, said Thanet Munnoy, chief of the Phuket office of the Department of Marine and Coastal Resources (DMCR).

“The structure will make an interesting dive spot for the area, especially after it begins to attract marine life,” Mr Thanet said. “Previously, locals had sunk a motorbike and a few other pieces of broken ships in an attempt to draw divers to the area.”

Locals from the island requested that the Marine Office approve that the section of ship be moved to the area.

“However, we had to ensure that there were no contaminants or anything still on board that could be harmful to the environment,” Mr Thanet said. “Our investigation found it to be clean enough.”

Once approval was granted, the DMCR, the owner of the Sinaran Andaman, and the owner’s insurance company worked together to move the section of the ship to its current location.

The 67.6 meter long multiple-purpose cargo vessel was one of several ships to sink during rough weather early in July (story here).