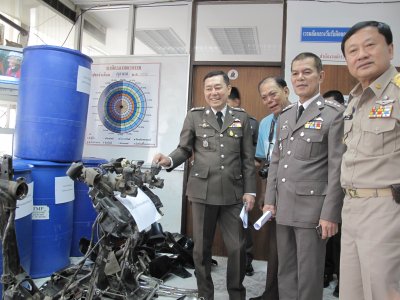 PHUKET: A young man arrested for motorcycle theft in Phuket yesterday confessed to police that he was disassembling the vehicles and preparing the parts to be smuggled into his native Burma.

Among them was a 22-year-old Burmese man identified only as “Tor”, who was arrested on charges of theft and receiving stolen property.

Mr Tor was arrested at 2am yesterday at his home in a Burmese workers’ camp in Wichit Village 4.

The young Burman, caught red handed disassembling stolen motorbikes, said he placed the parts in “market bags”, which in turn would be placed inside 200-liter plastic drums.

These were then put in large wooden crates in preparation for transport to the border crossing at Mae Sot in the northern province of Tak.

The entire operation in Phuket was led by a Thai man identified only as “Tong”, he said.

While motorbike theft is common in Thailand, Maj Gen Pekad said the methods used and intended destination of the stolen parts was unprecedented for Phuket.

“I am not sure whether Thai people are actually involved in this theft gang or not. It is currently under investigation. We are still searching for more suspects,” Maj Gen Pekad said.

Maj Gen Pekad also called on any recent motorbike theft victims to come to Phuket City Police Station to try and identify the remains of their bikes from vehicle identification numbers on several chassis seized as evidence in the case.

Crime statistics recently released by the Phuket Provincial Police showed a 12.7% decrease overall in the number of reported motorbike thefts between fiscal year 2009 and fiscal year 2010, which ended on September 30.