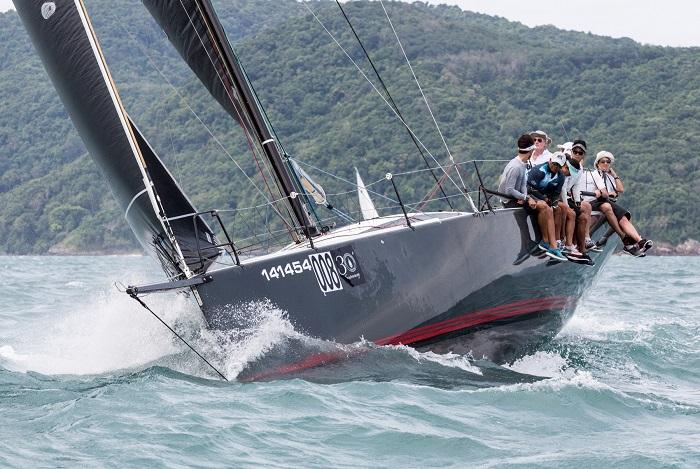 PHUKET: Stern winds, choppy seas and a spirit of competition on day two of the Phuket King’s Cup made for a fast and very tough day’s sailing Tuesday.

Kevin Whitcraft’s THA72 team scored a double win, beating rival Ray Roberts and team by two clear minutes in the first race of the day (IRC0). In the IRC1 class, Mandrake III skippered by Nick Burns (representing Hong Kong) took the day’s honors with a win and a second-place finish.

“Fabulous conditions,” said Mandrake’s skipper. “Today was very fast so we enjoyed it a lot. The first part of the day was great, surfing waves and topping out at about 17 knots (which is fast for us). Round the bottom mark, we were reaching into winds of between 17-20 knots.”

Belinda Cooper’s Aussie team on Senga capped off a good early run so far with another win. Modern racing cruiser Shatoosh from Hong Kong was fastest in the Premier Class, beating out Thai registered Pine Pacific, a regatta victory stalwart.

Race Officer Ross Chisholm said the day’s racing was one of the best ever in the King’s Cup, with cruisers running three races compared to the usual two. “We finished a 7-mile course and a 24-mile run in the afternoon – all in five hours.

New competitors this year include a mixed male and female 20-person crew from Osaka, sailing the boat Shiraz. “We just flew in from Osaka and chartered a boat. We know it’s unlikely that we’re going to beat the strong entries in our group. We’re here to have fun and to experience why so many people love this event,” said skipper Seiichi Tohyama.

The Phuket Gazette, Gazette Radio and The Nation are proud sponsors of the Phuket King’s Cup Regatta.